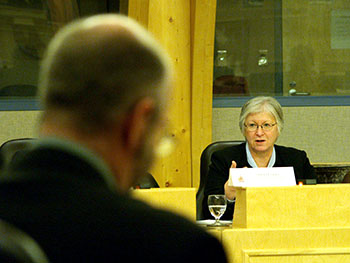 The Auditor General of Canada, Sheila Fraser, told Nunavut MLAs Sept. 29 that the understaffed Government of Nunavut has made little progress fixing basic financial management problems that she first flagged four years ago.

“The government does not have enough qualified staff to carry out basic financial functions,” Fraser said in introductory remarks before the Legislative Assembly’s oversight committee on government operations.

To help GN officials better understand why they still struggle to find qualified staff for financial and other jobs, Fraser said her office’s next GN report will focus on human resources.

That includes not just the Department of Human Resources, which is responsible for hiring and recruiting most GN staff, but the state of human resources “in general” on a government-wide basis.

Fraser said she hopes this report can be tabled by the spring of 2010.

Fraser declined, saying she didn’t want to give details of the report before it’s made public.

But she did say the report will looking at the GN’s capacity across all departments.

She added that it will also gauge whether GN departments know their staffing needs and whether they have programs in place to fill vacancies.

She also agreed with Elliott’s assessment that short-staffing increases the workload for employees in jobs the government has managed to fill.

“If the government needs 100 people to do a job and it only has 55, something’s got to give somewhere,” she said.

The auditor general came to Iqaluit this week to talk to MLAs about two reports on the Nunavut government that she tabled this past April.

The first evaluates the financial management practices of the Department of Health and Social Services, in a report that MLAs requested during the life of the last legislative assembly.

The second report grades the GN on how well its officials carried out 18 recommendations she made in a Nunavut-wide report tabled in 2005.

In her 2005 report, Fraser said the GN’s quality of financial management was extremely poor, mostly due to a shortage of qualified financial workers.

• departments spending large amounts of money before it’s been authorized by the Legislative Assembly;

• employees spending money in amounts greater than they are allowed to spend;

• poor tracking of money owed to the government and poor follow-up on collections;

• a “significant number of errors” in financial statements and poor quality of financial information;

• legally-required financial documents are tabled in the Legislative Assembly after legally-mandated deadlines, in violation of the Financial Administration Act.

“In our view, the underlying cause of the government’s lack of progress on our previous recommendations is its limited human resource capacity. Simply put, there are not enough financial staff to properly carry out basic financial functions,” Fraser wrote in her report.

(WITH FILES FROM CHRIS WINDEYER)