Too many loose dogs, too little vaccination 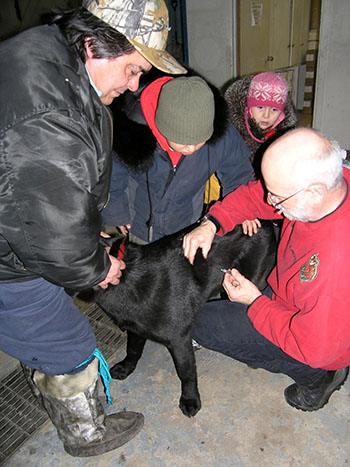 Veterinarians from Quebec’s agriculture department vaccinate about 600 dogs a year in Nunavik, but the vaccination program isn’t extensive enough to eliminate rabies from Nunavik. (FILE PHOTO)

KUUJJUAQ — Rabid dogs in Kangirsuk early last month bit two young children, who then received a series of vaccinations so they wouldn’t develop a fatal case of rabies.

The separate attacks by the infected dogs, which were running loose around Kangirsuk, has heightened concern about rabies prevention and control in Nunavik, where there are no regular veterinarian visits, many rabid wild animals, and lots of unattached dogs running around communities.

Foxes and wolves are the main carriers of rabies in the wild — and when they bite dogs, rabies can spread quickly.

About 600 dogs vaccinated are every year by veterinarians from Quebec’s agricultural department, according to figures from Quebec’s institute for animal health.

But rabies still ends up being transmitted among animals.

And every year to at least one or two people are infected, said Dr. Jean-François Proulx, coordinator for infectious diseases with Nunavik’s public health unit in Quebec City.

The rabies virus, present in the saliva of an infected animal, spreads to people who are bitten or scratched by an infected dog or fox, Proulx said.

The virus then travels along nerve cells to the brain.

Symptoms of rabies in animals usually develop between 20 and 60 days after exposure.

The symptoms can include either aggressive and combative behaviour or listless and weak behaviour.

But, in both kinds of rabies, the “furious” or “dumb” form, death occurs a few days after symptoms appear, usually from respiratory failure.

Rabies in people, which progresses in the same way, is also fatal.

Anyone bitten by an animal that may be rabid should wash the wound with soap and water for 10 minutes in water and then contact their local health centre immediately, Proulx said.

That’s because they need to be vaccinated against rabies with a series of five shots over 28 days, he said.

With no treatment for rabies once it develops, the best way to stop rabies is to prevent it, Proulx said, by animal vaccination programs, controlling loose dogs in communities and vaccinations, when someone is infected despite these efforts.

Joseph Annahatak, the mayor of Kangirsuk, brought his community’s concerns about local dog control to the recent meeting of the Kativik Regional Government.

Some dog owners don’t want to tie up their dogs, he said.

The municipality has the power through its municipal bylaw on the “keeping of dogs” to keep loose dogs off the streets, so its workers can shoot an animal that is ill or dangerous, KRG lawyers said.

As for rabies prevention, a 1999 public health report on rabies in Nunavik also says the KRG, working with police and municipal officials, also has a role to play.

The KRG is supposed to ensure that each municipality appoints at least two people responsible for intervening in cases of animals suspected of having rabies, says the report prepared by Proulx and Dr. Serge Déry, Nunavik’s director of public health.

These people are supposed to be responsible for monitoring the animal’s behaviour and health, killing the animal and collecting specimens for rabies diagnosis, says the report.

To develop better rabies prevention and control programs for Nunavik, Veterinarians without Borders is supporting a project in collaboration with veterinarians from the Université du Québec à Montréal and partners in Nunavik.