Feature: The most expensive photo-op you’ll ever see

“What we’re doing is simply training” 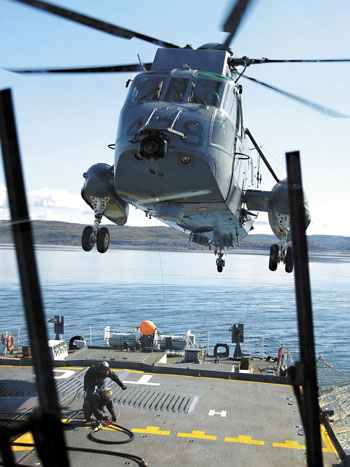 A Sea King helicopter hovers above the flight deck of the HMCS Toronto as crew members hook a fuel line up to the helicopter’s hoist. The exercise, viewed through a small booth called Flight Command, or FlyCo for short, is training in mid-air refuelling. 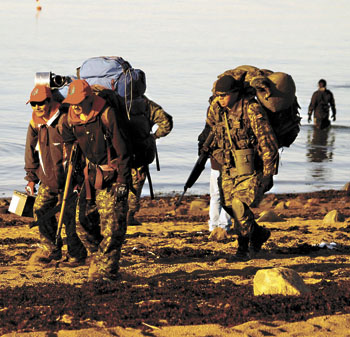 Canadian Rangers march up the beach in Apex Aug. 18. They joined soldiers from the Arctic Response Company Group to teach southern army reservists about living off the tundra and provide “predator control.” (PHOTO BY CHRIS WINDEYER 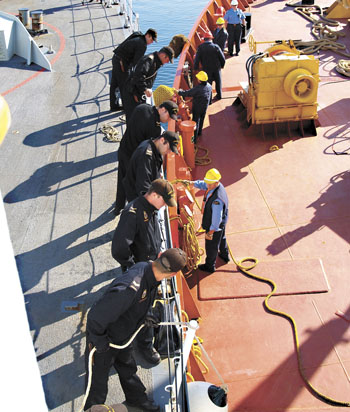 Crews from the HMCS Toronto, left, pulls away from the CCGS Pierre Radisson, right, after the two ships were moored alongside one another in Frobisher Bay Aug. 18. The Toronto took on a refill of diesel from the Coast Guard’s ship, which can hold eight times as much fuel as the Navy frigate. (PHOTO BY CHRIS WINDEYER 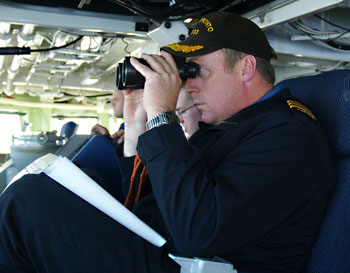 Cmdr. Alex Grant peers through binoculars from the bridge of the HMCS Toronto during an anti-submarine warfare exercise in Frobisher Bay Aug. 19. (PHOTO BY CHRIS WINDEYER

Three CF-18 fighter jets swoop low over Frobisher Bay and kick in the afterburners. The roar vibrates deep in the chests of the dozens of sailors, media and dignitaries assembled on the deck of the HMCS Toronto, a naval frigate.

Off the port bow, the Canadian Coast Guard Ship Pierre Radisson, and the HMCS Cornerbrook, one of Canada’s four naval submarines, hold their positions.

Prime Minister Stephen Harper, flanked by defense minister Peter MacKay and the Toronto’s captain, Cmdr. Alex Grant, happens to be between the bank of cameras and the ships as the jets blast by and the shutters click. This, obviously, is not a coincidence. In fact, the whole thing is delayed until all three ships are perfectly aligned.

It may just be the most expensive photo opportunity ever staged in Nunavut.

Harper’s government has taken a deep interest in the North, and one with a large military component.

But it’s also drawn criticism: Inuit leaders often complain the Conservatives’ Northern Strategy gives short-shrift to Nunavut’s long list of social needs, while some southern political observers suggest it overstates the threat to Canadian control over the Arctic posed by other countries.

“It’s not being overstated,” defense minister Peter MacKay told reporters during a scrum in the hangar of the HMCS Toronto Wednesday. “What we’re doing is simply training, preparing for the type of kind of activity that we know is coming… We know that with greater activity in the Arctic we’re going to see further civilian activity here.”

Still, politicians and military spokesmen use words like “projecting” and “presence” a lot. Operation Nanook is a show of force. And military officials freely admit there’s not much of a point to doing all this if no one hears about it.

But Operation Nanook is at its core a military training exercise, designed to get members of the Canadian Forces acquainted with operating north of 60. It started Tuesday, when dozens of soldiers from the Arctic Response Company Group shuttled from the HMCS Toronto and the Radisson to the beach in Apex in small inflatable boats piloted by Navy personnel.

“It’s very important practice for both the Navy and ourselves,” says Maj. Mike Clarry, of the ARCG.

Everything is a scenario, practice: here, the soldiers are to march inland from the beach to the Road to Nowhere — not a long walk, but try lugging 80 pounds of gear up that hill — and try to track down a foreign unmanned aerial vehicle that crashed nearby.

Joining the 64 reservists who are from the Toronto area, are three Canadian Rangers. They’re along to teach southern soldiers how to navigate and survive on the land. And while polar bear sightings so close to Iqaluit are rare, Clarry says the Rangers’ “biggest role is predator control.”

Later, aboard the HMCS Toronto, one of the Navy’s geriatric Sea King helicopters, emblazoned with an inuksuk on the side, hovers above the flight deck.

Two helmeted crew scramble to attach a fuel line to the chopper’s hoist. The helicopter crew pulls the line up and drifts off to the ship’s port side as the crew practices a mid-air refuelling drill.

“We have a couple of new bodies and they’re out there learning their job,” explains MWO Dan McLeod, who commands FlyOp, the flight operations centre, an enclosed pod about one storey up from the surface of the flight deck.

While no fuel actually gets delivered during this drill, it’s standard practice for the Sea King to drift back over the water while the hose is attached. “We don’t want it over the deck while the guys are out there working,” McLeod says.

The aging Sea Kings, soon to be replaced, are infamous for needing about 30 hours of maintenance for every hour of flying time, but the Toronto’s crew say they’re still capable helicopters.

“I’m hoping it’s not too dangerous for us standing here,” McLeod quips.

He’s joking. But he also notes that when a Sea King crashed on the deck of the HMCS Iroquois in 2003 some of the rotor blades tore through the hangar, right next to where McLeod, two other members of the air crew and several media are standing.

The in-flight refuelling exercise is standard fare for McLeod’s crew. In fact, they’ve been known to practice such drills in rough seas and at night. Under sunny skies on the almost glassy water of Frobisher Bay, McLeod says “from the air department’s perspective, this is just another operation.”

The next day, after the Prime Minister has flown back to Iqaluit, a phone is ringing on the Toronto’s bridge. “Answer the phone!” someone barks. Sailors check screens and instruments, and urgently call out information. “Twelve hundred yards and closing,” someone else calls out. Just off the Toronto’s port bow, a periscope breaks the surface of the water.

The Toronto is tracking the submarine HMCS Cornerbrook. It’s an exercise for both crews: junior officers aboard the Cornerbrook are learning how and when to dive and respond to maneuvers by the surface ship.

If this is a one-on-fight, the Toronto’s captain, Cmdr. Alex Grant says it would be no contest: the Cornerbrook’s ability to quickly dive and “hide” from the Toronto’s sonar means it could torpedo the Toronto at will.

The Toronto tries to keep its quarry guessing. The ship is the size of an office building, and it’s moving at 28 knots, banking 30 degrees to port or starboard and either weaving back and forth or pulling 180-degree turns. The civilians gathered on the bridge are holding on to anything that’s bolted to the floor.

Grant doesn’t have to worry about that. Instead, he and his crew are keeping a close eye on where they and submarine are going. They only have so much room to move because so little of Frobisher Bay is adequately mapped. The shortage of hydrographic data is one of the prime challenges for the Navy in the Arctic.

“Both the sub and the ship are doing this dance within a very narrow lane,” Grant says, effortlessly switching between cordial conversation with reporters and gruff commands to his crew.

But the Toronto can also bring itself from full speed ahead to a full stop in the length of two football fields. “If you botch a maneuver, you’ve got 15,000 horsepower to change directions,” Grant says.

On the deck of the Toronto, top military brass scrum with a grumpy posse of Parliament Hill reporters who are travelling with the Prime Minister on his Arctic tour. Rank-and-file sailors and a documentary film crew keep a bemused distance.

Gen. Walter Natynczyk, the Chief of Defense Staff, and Canada’s top soldier, insists Operation Nanook is just another training exercise. And he’s quick to point out that literally dozens of departments and agencies from all three levels of government have some sort of presence in Iqaluit for this operation. That will culminate in a “whole-of-government” exercise days later.

Natynczyk emphasizes the importance of training for search and rescue, environmental enforcement, preventing criminal activity. All of these are part of Operation Nanook that will unfold over the next few days.

That’s ultimately true. Canada has territorial disputes in the Arctic with the United States and Denmark, but also has cordial diplomatic relationships with those countries, and all three nations have firm commitments to resolve those disputes peacefully, or at least work around them.

Russia makes the occasional provocative move, like planting a flag under the sea at the North Pole, or sending submarines to cruise off the east coast of North America (in international waters, something that’s completely legal under international law.)

But Russia too has committed to sorting out territorial disputes through law and diplomacy.

That makes it impossible to set aside the fact that soldiers, billion-dollar Navy ships and submarines, and jet fighters, even when used as a photo backdrop, are weapons of war.

So it’s telling that Harper decided to pose for a photo there, instead of, say, next to a garbage can at Northmart. 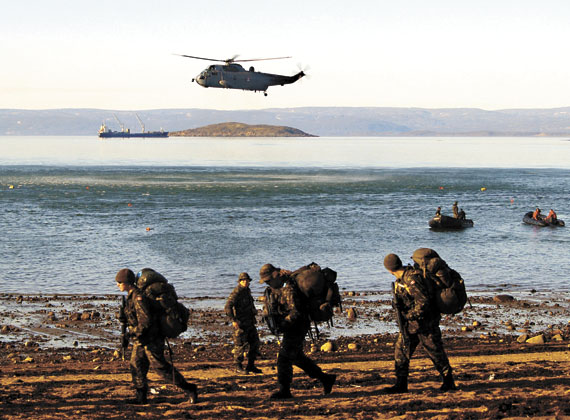 Soldiers from the Arctic Response Company group walk up the beach in Apex Aug. 18 as a Sea King helicopter from HMCS Toronto flies past them. The soldiers were among 64 troops from the 32nd Canadian Brigade Group of Toronto taking part in an Operation Nanook scenario on the land near Iqaluit. (PHOTO BY CHRIS WINDEYER