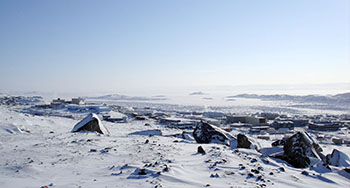 The haze which you see sometimes in the spring may be the result of agricultural fires in Canada’s western provinces, which also contribute to Arctic warming. (PHOTO BY JANE GEORGE)

COPENHAGEN — Every spring, when farmers in Saskatchewan and Alberta burn fields to get rid of dry stalks or clear brush for grazing livestock, the fires send clouds of smoke high into the air, which travel north to the Kivalliq region and end up as far away as Greenland.

Along the way, these fires drop soot particles onto snow and ice, soaking up heat and causing early melt.

Soot accounts for as much of 30 per cent of the warming in the Arctic, because it heats the air and the surface, says a report from the Clean Air Task Force, a non-profit organization in the United States.

Soot-laden smoke from agricultural fires stays in the atmosphere for about a week, where it leads to thicker, warmth-catching clouds and haze.

When air-borne soot particles from agricultural fires wash out, they land on snow and ice.

Many in Nunavut are familiar with this dirty fall-out. They’ve seen what’s known as “brown snow” from agricultural fires as far away as China and Russia.

A brief period of rain and sleet in the Kivalliq 20 years ago led to a thin, but detectable brown crust on the snow surface, which lasted for nearly two weeks.

The brown snow melted even when the temperature was at or below freezing, notes a 1991 Environmental Science and Technology article on the event.

That’s because the soot, which darkens snow and ice, absorbs more of the sun’s rays.

As the surface warms, snow and ice crystals then combine into larger structures which absorb even more energy and speed the pace of melting, the Clean Air Task Force report says.

As the snow and ice melt, the soot often stays on the surface where it continues to absorb heat and cause even more melt.

The exposed water and land then absorbs more heat, particularly in the spring when the sunlight is increasing and seasonal snow melt is already underway, says the task force.

Canada is among the top nations responsible for agricultural burning, also practiced in Russia, China and the U.S..

Canada has rules for agricultural fires that vary by province, but their goal is largely to limit the impact of the fires on air quality and surrounding property, while still allowing burning to take place.

The timing of these agricultural fires — early spring — means the smoke comes north during the most vulnerable period for sea ice melt, where it can also lead to health problems like asthma.

Finding ways to limit these agricultural fires could be relatively easy and buy the Arctic some time, until some of the larger cuts to large greenhouse gas emitters kick in, suggests the Clean Air Task Force.

Forest fires also have an impact on Arctic pollution and warming, but agricultural fires are likely to produce more warming because they burn more slowly, producing more soot.

Agricultural fires have taken place for thousands of years, but their smoke may be traveling further north than before due to warming in the Arctic.

That’s because smoke plumes travel best when the temperatures in the place they’re produced and their final location are similar.

Given that Arctic temperatures have risen and are now sometimes similar to spring temperatures far to the south, the transport conditions for smoke produced by agricultural fires may become more frequent, says Andreas Stohl of the Norwegian Institute for Air Research.