For Iqaluit’s neediest, Christmas comes in a hamper

Rotary, others, lay on dinner for hard-pressed families 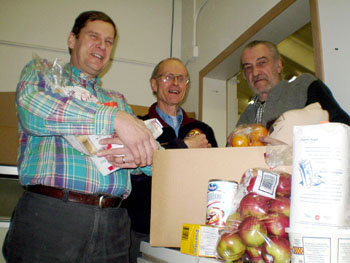 Not everybody gets to wake up on Christmas morning, open presents while a turkey is cooking in the oven.

For far too many Iqalummiut, Christmas morning means no presents, no tree and perhaps nothing to eat for dinner.

That’s why the Rotary Club is trying to do its part by at least helping out some families by making sure that on Christmas there’s a good meal waiting for families. About 200 hampers filled with a turkey, potatoes, fruit, coffee and other food will be delivered in the days leading up to Christmas to help out less fortunate families.

John Matthews is a member of the Rotary Club and is responsible for spearheading the hamper drive. He said the Rotary is continuing on the work started by people like Fred Coman and Mike Gardener to help the less fortunate during the Christmas season.

“Originally they cooked a turkey and took it over to people who didn’t have food. But then others got involved and it grew from there,” Matthews said.

Putting together the hampers requires a group effort. A small committee with the Rotary sends out letters asking for donations. Matthews said the response from the community for help is always gratifying.

And even with harder economic times most businesses and individuals are still willing to step up and help.

“The Legion has been very supportive as have The Elks. So has Nunastar and the Frobisher Inn,” he said.

After gathering together everything needed for the hampers they get together to assemble them. However, it’s not just a few people in a small room working on the project. Matthews said it’s much more than that.

“Rotary is spearheading, but it really is a community Christmas hamper. The community gives to this project and on December 19 lots and lots of people come to the community hall to help, not just Rotarians,” he said.

The tricky part then is determining who gets a hamper. It’s not as easy as some people might think. There is the issue of privacy.

Some families are understandably worried about being viewed as being in need. So Rotary has to step carefully in figuring out who is in need around Iqaluit and making sure the right families get a hamper.

It’s a delicate balance, but connections with those who work with the needy in town provide guidance on who could use some assistance for Christmas. And even then, not everyone gets one. There are only so many hampers and so many people in need.

“Getting a hamper is a complete surprise to some, but others have come to expect it. And we know some people are disappointed if they don’t get one. It’s always difficult, but we do the best we can,” he said.

If people want to help assemble the hampers they are encouraged to go to the community hall on Dec. 19 or get in touch with the Rotary Club for more information.