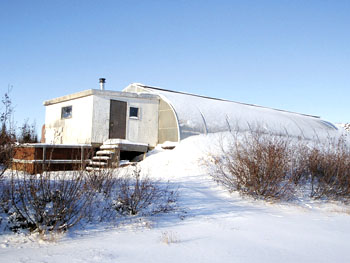 Kuujjuaq may someday get a large not-for-profit greenhouse similar to those in Iqaluit and Inuvik. (FILE PHOTO)

Nunavik’s landscape doesn’t often conjure up images of freshly-picked produce, but this could change if a plan to establish a large greenhouse takes root in Kuujjuaq.

“Greenhouses aren’t historically a part of Inuit culture,” said Elle Avard from the Nunavik Research Centre. “But I’m finding as people are becoming more linked to the south, there’s more of an integration of fruits and vegetables into the local diet.”

Avard, a grad student from Université Laval’s geography department, is studying the potential of building and managing a greenhouse in Kuujjuaq as a way of providing fresh produce to the community, a dream of the Quebec Horticultural Council for years.

Thanks to daily flights from the south, people in Kuujjuaq have access to a good variety of fresh produce and the Inuit who live here have incorporated even the most exotic items into their diet, she said.

Avard’s job involves surveying local leaders, administrators and the community at large to gauge interest in the project, to find out more about the local consumption of produce and how the greenhouse should run.

“I’ve had pretty positive feedback to date,” Avard said. “One of the things that’s really interesting that I wasn’t expecting is the number of people that have their own little greenhouses that they operate at home or at their cabins on the land.”

The ideal model for the Kuujjuaq greenhouse would be based on the Inuvik Community Greenhouse in the Northwest Territories, Avard said, which is as a not-for-profit commercial operation that also offers plots for local gardeners to rent.

In Kuujjuaq’s case, the Horticultural Council would offer the support and training needed to manage the greenhouse production while harvesting can be taught to anyone, Avard said.

“There’s really no limit (to what we could grow) but there are things that grown well in greenhouses,” Avard said, mentioning such vegetables as tomatoes, cucumbers, broccoli, cauliflower and different varieties of lettuce.

If this greenhouse model works, Avard said, there’s even the potential for expansion to the rest of Nunavik.

But with all the support Avard and her backers can lend to the project, she said wants to be sure the initiative ripens at the local level – by the people, for the people.

Yet while the greenhouse model now under discussion may be new to the region, greenhouses aren’t entirely new to Nunavik.

A small greenhouse already sits on the outskirts of Kuujjuaq, which was built in the 1990s by another Université Laval research centre to grow grass and tree seedlings.

When the project was completed, the greenhouse was turned over the municipality and now Kuujjuammiut use its indoor garden plots free-of-charge to grow their own crops during the summer months.

“It’s popular,” Fortin said, a seasonal gardener there herself. “And it’s really enjoyable.”

This greenhouse could be renovated for the semi-commercial project now being promoted.

An earlier greenhouse built to start seedlings at an experimental farm at False River stood outside Kuujjuaq in the 1950s.

The Hudson’s Bay Company and the Anglican and Catholic missions across the region have also been known to keep small greenhouses.

Father Jules Dion, a Catholic missionary who has lived for more than 50 years Kangiqsujuaq, thinks greenhouses are a feasible way to cultivate fresh food in a non-agricultural region — and he has first-hand experience of the work involved.

At one time, Dion tended to his own greenhouse built on to the mission house, where he grew flowers and harvested radishes, lettuce and cabbage for almost two decades, until the early 1990s.

The modest greenhouse was of great value in its early years, Dion said, because villagers were still unable to buy fresh vegetables from the newly-opened co-op store.

Soil was hard to come by then, too, so a fellow missionary used to make his own earth from decomposed algae and dog droppings.

Dion’s growing season was brief — from mid-June to August — because the space wasn’t heated.

By 1992, Dion stopped using the greenhouse because he found that spring was coming later each year and frozen ground meant he couldn’t sow in time.

That is also a concern for Fortin who feels a commercial greenhouse may not generate enough revenue to pay for itself.

“As a business, I imagine it would have to operate year-round,” Fortin said. “The costs to heat it in the winter would be enormous.”

But Kuujjuamiut Inc. general manager Jason Aitchison said the idea of a greenhouse has already proven that it can work — what it needs now is direction.

“If there’s enough local support, it could work,” Aitchison said. “We really encourage it.”