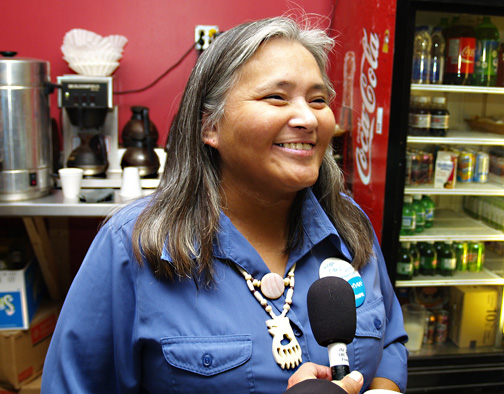 Elisapee Sheutiapik flashes a smile while speaking to reporters Monday night. Sheutiapik took 58 per cent of the vote to win a third term as Iqaluit’s mayor after defeating challenger Jim Little. (PHOTO BY CHRIS WINDEYER)

Sheutiapik took 885 votes to Little’s 649 in a contest that was closer than some expected.

“Thanks to the voters and supporters,” Sheutiapik said, as a handful of family and friends celebrated the results at the Grind ‘n Brew coffee shop.

“I know this is going to be a big term for me because obviously they’ve re-elected me and I’ve got to roll up my sleeves to ensure that I earn the votes that they’ve given me.”

It’s the first time in six years Sheutiapik faced a challenger for the mayor’s job. She was acclaimed in 2006.

Little ran on a platform of change at city hall, but fell just short of toppling Sheutiapik. In an interview Tuesday morning, he admitted the loss was a tough one to take, but accepted the will of the voters.

“I had to work my ass off to get what I got,” he said. “[But] what I was saying was ringing true with the electorate.”

Now out of politics, Little said he plans to spend more time working on the greenhouse and compost projects of the Bill MacKenzie Humanitarian Society. He said he hopes the new council takes action to fix the city’s solid waste problems.

“[Little] did a great job campaigning,” Sheutiapik said. “Hats off to him. It was clean, it was all about trying to send the message [of] whether you understand what the issues are and I think he did that quite well.”

Wilman captured 967 votes, nearly 260 more than any other council candidate.

Wilman said she campaigned on a platform of better communication and tackling the city’s garbage woes. She said she wants to find ways to get Iqalummiut better involved in city decision-making.

“There are quite a few people who are feeling left out,” Wilman said Tuesday. “We need to make them feel as though this is there community. It’s all of us. It’s not just Inuit, it’s not just qallunaat.”

The eighth and final council seat was hotly contested, with Alexander edging out political newcomer Romeyn Stevenson by a single vote. And incumbent Glenn Williams and challenger Tony Rose both finished within 30 votes of Alexander’s tally of 597.

Kirt Ejesiak, the chief returning officer, confirmed Tuesday morning Stevenson has asked for a recount. “I will be awaiting the full 72 hours to see if any other candidates will be requesting an administrative recount, [w]hich will likely put off the recount to early next week,” Ejesiak wrote in an email.

Any candidate can ask for a recount within 72 hours of election day.

It’s not yet known if there will be recount for that election.

Voter turnout was strong Monday. There was a steady trickle of voters at the Cadet Hall just before noon, and the polls were said to be busy during the late afternoon.

That figure is up sharply from 2006, when a council-only election drew just 33 per cent of eligible voters to the polls.

You can find detailed results at the City of Iqaluit’s 2009 election website.