Boyfriend, 32, on life-support in Ottawa hospital 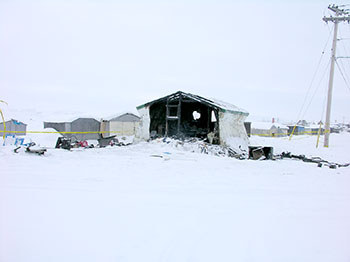 A Iqaluit man, Richard Doucet, 32, suffered severe injuries in a Feb. 19 fire that gutted this old matchbox house that’s been converted into a shack on the beach. His 19-year-old girlfriend now faces one count of arson.

A Iqaluit girl not yet out her teens stands accused today of setting a fire on Feb. 19 that has left her boyfriend surviving on life-support at an Ottawa hospital.

An Iqaluit RCMP spokesperson said they laid the charge on Feb. 22, following an investigation into a fire that broke out in a shack on the beach located behind the old courthouse building in Iqaluit

Richard Doucet, 32, the main occupant, was medevaced to Ottawa after arriving at Qikiqtani General Hospital in critical condition, police said.

Police said the man suffered from severe smoke inhalation and other injuries.

Following an investigation, Annie Tikkivik, 19, the man’s girlfriend, was charged with one count of arson.

Tikkivik was also treated for smoke inhalation, but is in good condition.

The RCMP said she’s likely to be released on conditions pending a court appearance set for April 23.