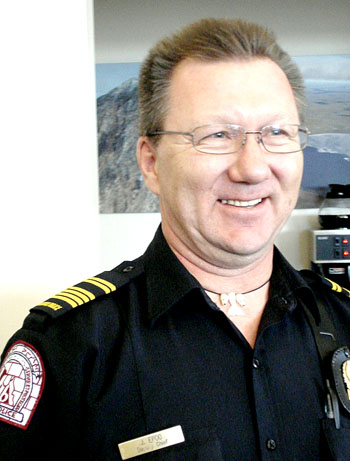 Following a Jan. 20 conviction on charges of impaired driving and mischief, Jobie Epoo, shown here in uniform in 2008, is no longer the interim police chief of the Kativik Regional Police Force. Kativik Regional Government councillors voted to dismiss him Feb. 24. (FILE PHOTO)

KUUJJUAQ — The Kativik Regional Government has fired Jobie Epoo from his job as interim police chief of Nunavik’s Kativik Regional Police Force after he pleaded guilty on Jan. 20 to charges of impaired driving and mischief under $5,000.

Epoo had been suspended with pay since October 2008, when the charges were laid in Montreal.

The KRG resolution said “the mission of a police force is to uphold the law, to protect the public and to prevent crime,” and that alcohol-related offenses cause the majority of crimes in the region.

“Having been convicted of offences while intoxicated makes it impossible for Jobie Epoo as the top ranking officer of the KRPF to credibly represent the KRPF… and to carry out his duties with the trust of the public, the respect of the KRPF officers and the moral authority needed,” reads the resolution, moved by regional councillor Michael Cameron of Salluit and seconded by regional councillor Mary Pirlutuut of Kangiqsujuaq.

Before passing the resolution, councillors and KRG lawyers met for more than three hours for an in camera discussions held outside the KRG’s council meeting, which is normally held in public.

The councillors started the behind-closed-doors session at 1:30 p.m., stopping briefly at 3 p.m. for a cigarette break.

Epoo then arrived and spent about half an hour with the group.

In an interview given to Nunatsiaq News after leaving the conference room, Epoo said he was relieved.

Epoo said he hoped the councillors would decide to give him another chance to lead Nunavik’s police force one day.

After completing management training, Epoo would have become the first Inuk chief of police at the KRPF, which was intended to become an aboriginal-run police force.

Epoo said he regrets causing any embarrassment to the KRG, KRPF, his co-workers, and particularly, to his family through what he called a “stupid mistake.”

“I regret that I let down anyone who thought of me as a role model, and to everyone in Nunavik I can just say that I’m sorry.”

The KRG temporarily suspended Epoo, 52, from his position as interim police chief of Nunavik’s KRPF in October, 2008, after he was charged in Montreal with impaired driving and mischief.

Epoo failed a sobriety test and also broke a telephone, according to the description of charges.

Epoo pleaded guilty to charges of impaired driving and mischief on Jan. 20. He was fined $1,000 and ordered not to drive a motor vehicle for one year.

Epoo said he told the council that made a mistake by drinking and driving, and that he is sorry for the error of judgment.

“If they find out that it warrants a dismissal, they can do it and or consider another sanction,” Epoo said after his meeting with the council.

Asked by a councillor if he had sought help for his problems with alcohol, Epoo said he was willing to undergo an evaluation and enter rehabilitation if necessary.

Councillors had no other questions for him, and Epoo said he felt there was little support for him around the table.

After Epoo’s suspension in 2008, Aileen MacKinnon, the KRPF’s former deputy chief of operations, took over as police chief on a temporary basis.

At the time of his arrest, Epoo had not yet been officially sworn in as KRPF police chief.

Epoo is the second top officer at the KRPF to be dismissed by the council.

In September 2006 the council voted to fire police chief Brian Jones, who is now an investigator with the Whapmagoostui Cree police force.

Maggie Emudluk, the chairperson of the KRG, said that removing Epoo from his position was difficult because of his 12 years of service with the force and that he was an Inuk.