“I love him with all my heart” 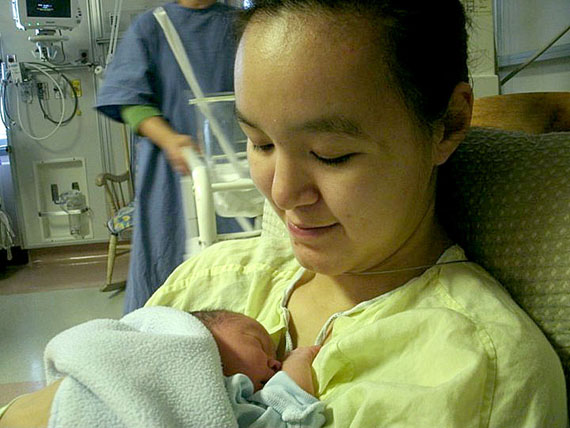 Louisa Pilurtuut with her newborn son William. William was born on an Air Inuit medevac to Kuujjuaq Nov. 16. (FACEBOOK PHOTO)

Babies don’t always come when we plan for them, but one Nunavik newborn showed up at a higher altitude than most over Ungava Bay last week.

But the Kangiqsujuaq woman went into labour early Nov.16.

An Air Inuit Twin Otter medevac flight from Kuujjuaq arrived at the community with two nurses and a doctor on board.

The plane quickly loaded Pilurtuut, her father, and a cousin on board.

At about 4:30 p.m., somewhere between Kangiqsujuaq and Kuujjuaq, Pilurtuut delivered her son, William.

“It was really hard,” Pilurtuut recalls. “I was feeling like I wanted to die because it hurt so much, it was so scary.

“But he was alright when he was born, thank God I have him in my life.”

William weighed in at five pounds, two ounces at birth. Mother and son were treated in Kuujjuaq and then sent on to Montreal so the baby could be kept for observation. He was released from the hospital Nov. 23.

And although he’s too young to know it, little William can look forward to free flights on Air Inuit for the rest of the life.

Air Inuit offers a free pass to infants born on its flights — although this offer hasn’t been extended often.

“It does happen,” said Air Inuit’s Jean Dupuis, recalling a medevac from Hudson Bay to Iqaluit a few years ago when a mother gave birth en route. “These babies are very lucky.”

But travel can wait, for now. Pilurtuut just looks forward to being at home with her newborn son and the rest of her family.

“I love him with all my heart,” she said.