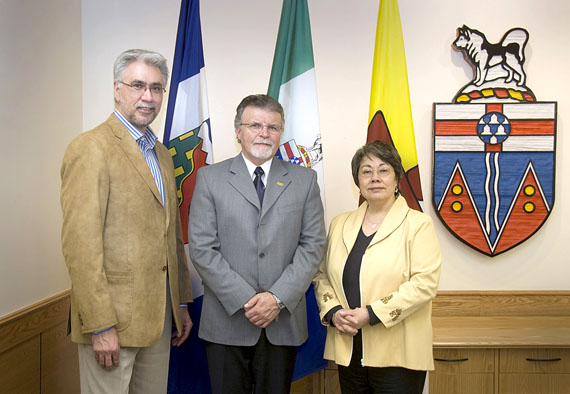 The premiers of the three northern territories, Floyd Roland of the Northwest Territories, Dennis Fentie of Yukon and Eva Aariak of Nunavut, all say they want more cash from Ottawa to pay for health care, housing and infrastructure. (PHOTO COURTESY OF YUKON GOVERNMENT)

The three northern premiers sang a familiar tune May 14 at a news conference wrapping up their annual meeting in Whitehorse: Ottawa needs to step up with more money for health care, housing and infrastructure.

“We will be directing our housing ministers to continue their work with the federal government to ensure a long-term, stable and predictable fiscal relationship with Canada to deal with the gap of housing across the North,” Fentie said.

But the three premiers, including Nunavut’s Eva Aariak and Northwest Territories Premier Floyd Roland, also announced the creation of a working group on northern telecommunications issues.

“This is another area of infrastructure where there are gaps in the North and communications infrastructure is essential to many things, not just economic development, not just our communities, but Arctic sovereignty (and) the Department of National Defence,” Fentie said.

The premiers also pledged to work together on the creation of a northern university, a renewable energy strategy, an agreement on water stewardship and pan-northern tourism marketing.

They also promised the completion of a northern climate change adaptation strategy by the end of this year.

“The strategy will identify climate change issues shared by each territory such as melting permafrost, changing sea ice and invasive species,” says a communiqué issued by the premiers.

The premiers also met as a group for the first time with Canada’s permanent participants at the Arctic Council: the Arctic Athabaskan Council, Gwich’in Council International and Inuit Circumpolar Council.

Fentie said the six leaders agreed to “take a more forceful role” on circumpolar issues and will meet regularly in an effort to “influence Canada’s foreign and domestic policy as it relates to the Arctic.”

Northern premiers will meet again during the Western Premiers Conference this coming June and at the Council of the Federation, which includes all 13 provinces and territories, later this summer.