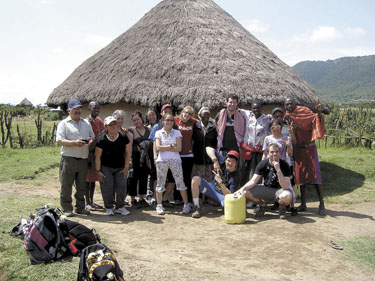 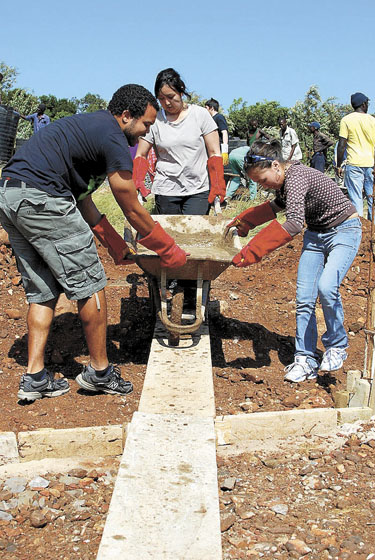 Sheila Nappatuk hauls concrete for a new school building floor with the help of Sengei, a Masai guide. (PHOTO BY ADAM FEATHER) 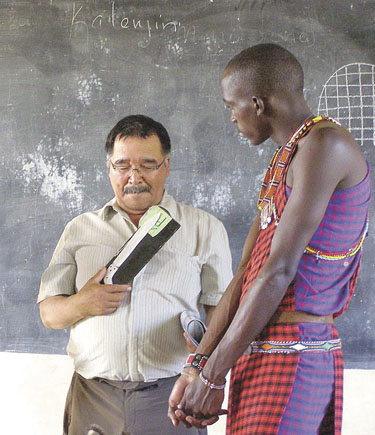 Juanasie Qaqutuk of Akulivik talks to Kipsigi elders about how to build an igloo with the help of Sangai, a Kenyan guide and translator. (PHOTO BY QUINN CARTER)

When the paved road ended and the green army truck started to lurch down a rocky cowpath, everyone was startled by more than just the rough road.

As they looked out the windows, the group of 12 visitors from Akulivik watched young African children sprint out of their mud huts and dash through farmers’ fields to the edge of the road.

When the Kenyan children reached the truck, they ran alongside it, waved joyously, and called out, “Hello!”

“When I saw them running barefoot over the rocks, I couldn’t believe it,” said Juusi Aliqu, a Secondary 5 student at Tukisiniarvik School in Akulivik. “They’re so poor.”

In late June, the group of 10 Inuit students, elders, and adults travelled with two secondary teachers from Akulivik on Nunavik’s eastern Hudson Bay coast to the east African country of Kenya to participate in an international development program run by the Canadian charitable organizations Me-to-We and Free the Children.

From June 20 to 28, they worked with villagers in rural Kenya to build schools, plant trees and food crops, haul water, and engage in cultural exchanges.

While the students from Akulivik were sometimes taken aback by the level of poverty they witnessed in Kenya, some also took inspiration from it.

When working on the foundation of a new library at Enelerai Primary School in Kenya, Sheila Nappatuk, a Secondary 5 student, refused to stop working when she was asked to put down her tools.

The Kenyan villagers, grateful for the work done by visitors from Nunavik, welcoming them to several Kenyan villages with traditional songs, dances, and gifts of beaded jewelry.

The students were both delighted and surprised by the hospitality shown to them by their African hosts.

During their stay, the students were busy: they broke ground for a new library, poured concrete for the floor of a classroom, built the walls of a teacher’s residence from stones and mortar, planted 150 trees to be used by local farmers for fruit and shade, helped a local mother haul 50-litre containers of water over more than a kilometre from the nearest river to her home, and planted a vegetable patch in a school garden, which will help feed Kenyan students who often suffer from malnutrition.

“I’ve never gardened before,” said Nellie Aliqu, an adult chaperone for the trip. “It was fun.”

The trip provided the Akulivimmiut with many other opportunities for fun.

During their stay in Nairobi, the capital city of Kenya, students and chaperones were taken to a baby elephant orphanage, where they watched elephant toddlers drink milk from bottles and play in the mud, as well as a giraffe sanctuary, where the more adventuresome fed the animals by placing bits of food between their lips and letting the giraffes lick them off.

“Kissing a giraffe was the highlight of my day,” said Mattiusi Matt-Qiluqi, a Secondary 2 student.

The group also went on a one-day safari in the Masai Mara National Park.

In the African savannah, they saw hundreds of big game animals in the wild, including elephants, lions, rhinoceroses, water buffaloes, giraffes, wildebeests, ostriches, antelopes, and gazelles.

Through conversations with their Kenyan hosts, Inuit discovered that traditional Inuit culture shares many practices and values with traditional Kenyan cultures.

When one of the Kenyan guides told the group stories about how his tribe hunts lions, those on the trip responded with their own stories about hunting seals, whales, caribou, and polar bears.

Sometimes, cultural connections were more difficult to forge. One afternoon, the students and chaperones sat down to discuss cultural traditions with a group of Kenyan elders from the Kipsigi tribe.

Traditionally, members of the Kipsigi tribe distinguish themselves from other Kenyan tribes by removing their front bottom teeth and making large holes in their earlobes.

When Nellie Aliqu saw the Kipsigi elders, with their missing teeth and stretched ears, she did not want to talk with them: “I was scared.”

The conversation was even more challenging because the discussion had to be translated from the Kipsigi language into Swahili, the national language of Kenya, from Swahili to English, and finally from English to Inuttitut.

But as Nellie and the others from Akulivik listened to the Kipsigi elders explain how their culture, religion, and lifestyle changed after the arrival of European missionaries, Nellie’s fears started to subside.

“We had similarities and I learned they’re just people,” she said.

“There are no trees where you come from?” asked a Kipsigi elder. “But then how do you grow crops?

Nellie Aliqu and Lucy Anautak, an Akulivik elder, explained that they had been born in snow houses and then used pictures and photographs to explain how igloos are built.

At first, the Kipsigi did not seem to believe their stories — since many of the Kipsigi had never seen snow — but, as Nellie and Lucy continued their explanations, wonder spread across the faces of the African elders and they crowded excitedly around pictures of the tundra.

“It made me proud to be Inuit,” Nellie Aliqu said.

The $95,000 trip was made possible by donations from public and private sponsors, including Nunavik’s Ungaluk Safer Community program, the Saputiit Youth Program, the Brighter Futures Project, the Akulivik Land Holding Office, the Kativik Regional Government, Makivik Corp., Air Inuit, Chlorophylle clothing, and the Government of Quebec. 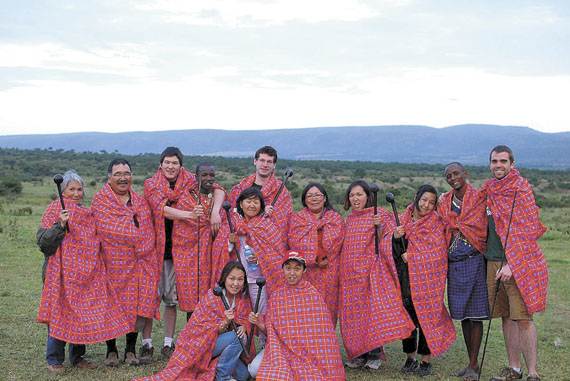 A group of students from Akuivik’s Tukisiniarvik School along with their chaperones and teachers became honorary Masai warriors when they visited Kenya earlier this summer. (PHOTO BY ADAM FEATHER)