“Wind power is known, it already exists on the main grid” 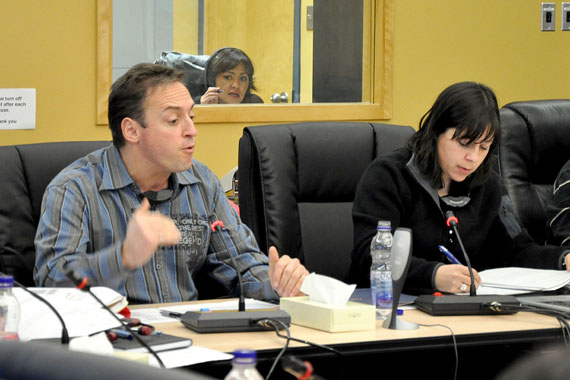 KUUJJUAQ — The answer to Nunavik’s energy needs could be blowing in the wind.

Hydro Quebec plans to do a feasibility study in Kangiqsualujjuaq in 2011 to see if this Ungava community is the right site for one or more wind generators which could produce up to 700 kilowatts of power.

The giant rotary devices like huge windmills extract energy from wind, which is then converted into electricity.

Wind energy is generally considered to be a much more environmentally friendly option to the costly— and polluting — imported diesel fuel that now lights and heats homes across Nunavik.

“Our first priority is to guarantee the reliability of the power supply,” said Hydro Quebec’s Steve Fulham.

“After we’ve made sure we’re meeting the community’s power needs, we look at renewable energy sources. Wind power is known, it already exists on the main grid. We just need some more technology to hep us integrate this into the grid.”

Seven Nunavik communities have the capacity to farm wind, although Kangiqsualujjuaq will get the test run, Fulham said in his Nov. 29 presentation at a meeting of the Kativik Regional Government council in Kuujjuaq.

Two firms — Enercon of Germany and Powercorp of Australia — are currently competing for a contract to carry out an engineering study in the community, Fulham said.

If studies are favourable, wind generators could be producing power in Nunavik by 2015, he said.

Fulham could not offer any cost estimates for the project.

The wind generators would be owned by Hydro Quebec, which would convert the wind to electricity fed into the province’s main power grid.

Due to its ownership by Quebec’s power corp, his scheme is essentially different than the plan to build a hydro dam in Inukjuak owned by the local landholding corporation, which would then sell electricity to Hydro Quebec.

Wind generators wouldn’t reduce the cost of electricity for the host community or the region, Fulham explained, although it would offer a cleaner form of energy.

And it could be a less expensive option for Hydro Quebec too, which now produces electricity in Nunavik at a rate many times higher than in the South due to the high cost of transporting diesel fuel.

“Basically, the price of electricity paid by [Quebec residents] is the same anywhere in Quebec,” Fullam said. “The price of wind power will be absorbed by all energy users. What will change for the community is the amount of fuel burned and the air quality.”

But community leaders said they want to make sure the giant wind mills aren’t going to have negative effects on their communities either.

Kangisualujjuaq mayor Kitty Annanack, who also serves on the KRG regional council, wants to make sure the presence of the devices doesn’t interfere with local hunting.

“If the wind mills will scare away wildlife, it will have a negative impact on us,” she said. “Store bought food is expensive and we rely on animals.”

Environmental impact studies must be carried out before the project can go ahead, Fulham assured her.

“When you install a new technology, there are always upsides and downsides,” he said. “But in general, [wind turbines] don’t move fast, they’re raised off the ground and they don’t make too much noise. [The impact] should be minimal.”

Akulivik is the second village slated for a wind project.

This isn’t the first time wind turbines have appeared on the Arctic landscape — experimental windmills have previously operated in some Nunavut communities, and there was even one in Kuujjuaq in the 1990s.

But heavy winds, snow and ice make the devices impractical. So, a new generator would have to be designed to withstand extreme Arctic weather.

Hydro Quebec representatives also told regional councillors about other forms of renewable energy that the provincial agency is looking at in Nunavik.

Some of those include tidal power, hydrokinetic power (underwater currents) and hydro power.

But before they harness any new forms of energy, Hydro Quebec plans to increase energy capacities in Nunavik villages over the next 15 years with upgrades to existing generating plants, as was done recently in Kuujjuaq.

Some of the work includes placing units or adding outdoor trailers, in come cases almost doubling the generating capacity of certain communities.

“Our generating plants are aging and demand is growing,” Fulham said. “Our project is to meet that demand and ensure the reliability of power.”