“We owe it to our soul and spirit to laugh” 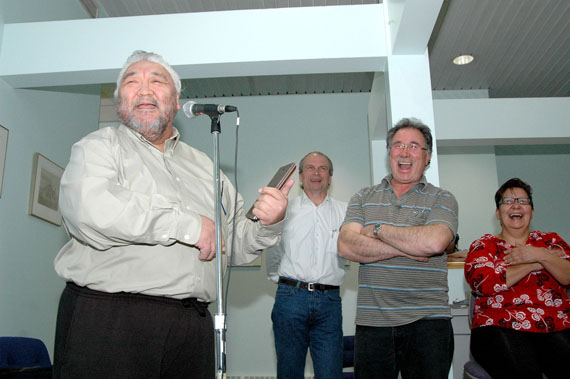 Jose Kusugak: May 2, 1950 — Jan. 19, 2011. “Every situation has a funny side to it. We owe it to our soul and spirit to laugh and see the sunny side of life.” To honour his work in Inuit language broadcasting, Kusugak received CBC North’s Elijah Menarik Award this past Nov. 19 at an event in Iqaluit. (PHOTO COURTESY OF FRANCO BUSCEMI, NTI) 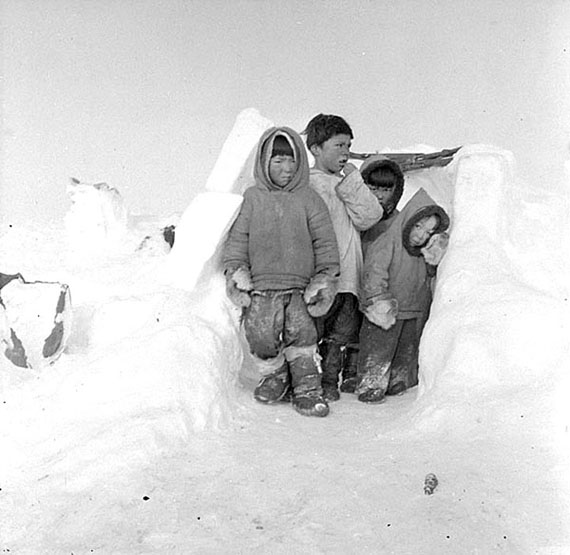 Jose Kusugak, aged three (last on the right), at the entrance to a qammaq located in Repulse Bay, his birthplace, in 1953. On Jose’s right stands his brother, Michael Kusugak, with Yvo Airut and Paul Manittuq. (PHOTO BY J.C. JACKSON, LIBRARY AND ARCHIVES CANADA PA-102697) 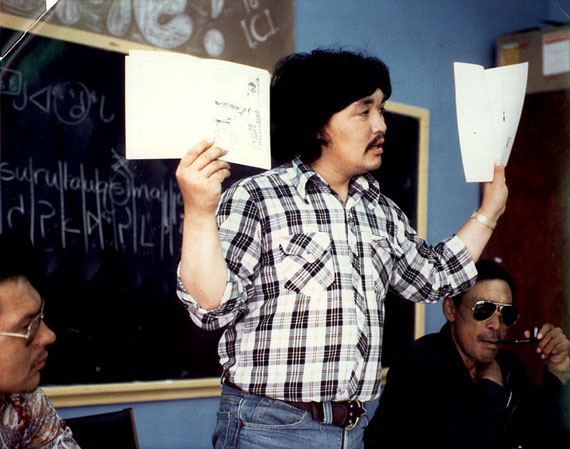 In this undated file photo from the 1970s, Jose Kusugak makes a presentation to the Inuit Cultural Institute on his dual-orthography system for the Inuit language. (FILE PHOTO) 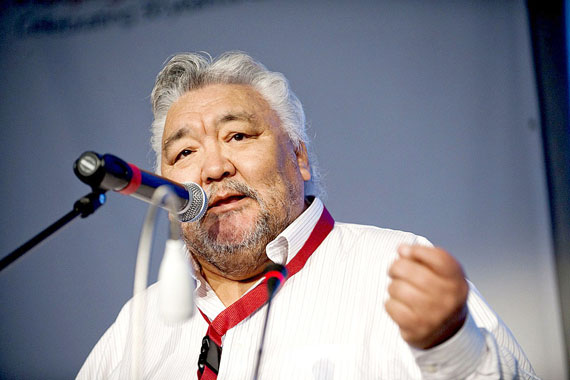 Jose Kusugak this past July 1 at the Inuit Circumpolar Council general assembly in Nuuk, delivering a personal message. Having been recently diagnosed with terminal bladder cancer, Kusugak urged all Inuit to get medical check-ups, and he asked all delegates to think of him and his battle with cancer. (PHOTO BY LEIFF JOSEFSEN, SERMITSIAQ) 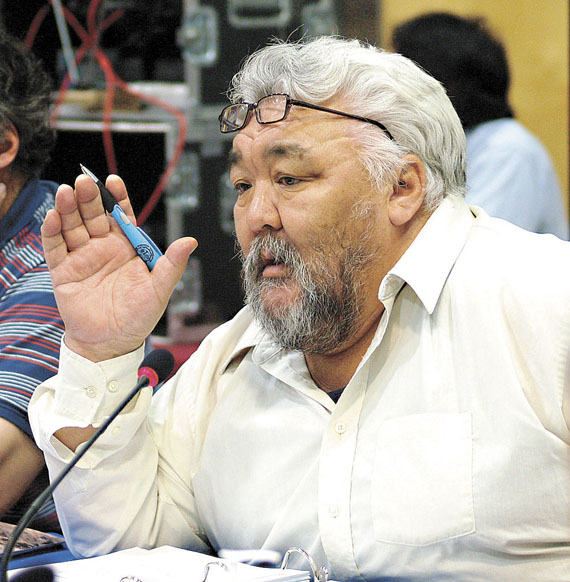 The serious side of Jose Kusugak. At an annual meeting of Nuavut Tunngavik Inc. held Nov. 17, 2009 in Apex, Kusugak blasted the state of NTI’s finances, calling tabled financial statements “a mess.” (PHOTO BY CHRIS WINDEYER)

Jose Kusugak never lost that unique ability to find and express humour in every situation, even in his final days. He died very early on the morning of Jan. 19, at his home town of Rankin Inlet.

Barely a week after doctors at the Winnipeg Cancer Centre told him he had only a few weeks to live because cancer of the bladder had spread to other vital organs, he was still able to laugh at his predicament.

He was at his kitchen table, visiting and drinking tea. His brothers and sisters were providing constant hugs and love. His four children and Nellie, his loving wife of 34 years, cared for him while half dozen grandchildren played quietly on the floor.

His hair had turned almost snow white, he had lost considerable weight, but the twinkle in his eye remained and a smile came across a face wrinkled from a lifetime of laughter as he shook two packets of Sweet and Low into his tea.

“What the hell am I doing with this stuff? How can real sugar hurt me now?”

Jose Amaujaq Kusugak, died as he had lived, candidly, publically and above all, with courage and control. He was 60.

He attended residential schools and graduated from the Churchill Vocational Institute. He was one of the few who found the experience rewarding and productive, and said it was there that he realized education is the key to “Inuit cultural survival.”

Perhaps doctors could have prolonged his life for a few weeks had he stayed in Winnipeg and “in care,” but he returned home to be with family and friends.

He had no regrets in a life filled with remarkable accomplishments, including raising Inuit identity issues in the national consciousness and playing a pivotal role in the creation of Nunavut.

As president of the Inuit land claim organization, Nunavut Tunngavik Inc., he was responsible for negotiating the creation of Nunavut with the Government of Canada and the Northwest Territories, which was divided into two separate jurisdictions.

The new territory was proclaimed April 1, 1999. It was a historic moment in Canada’s evolution and Jose got an unexpected reaction.

“I remember getting an e-mail from an old friend in Vancouver who saw me on television proclaiming the new territory. He recalled laughing at me in the 70’s when I declared that that one day Inuit would have their own territory.

“But when he saw me with the prime minister and Governor General basically changing the map of Canada, he said to his wife, “Look, there he is, Jose Kusugak. He did it! That little shit, he did it.” I laughed reading his e-mail and realized we had done an unbelievable thing.”

The journey to the creation of Nunavut brought him full circle and he enjoyed telling the story of how he joined the “land claim movement” in the very early 1970s as a field worker.

He was working as a cultural and language advisor at the Churchill Vocational Institute and went to Ottawa asking for funds from the leader of the recently formed Inuit Tapirisat of Canada, Tagak Curley, to develop a common Inuktitut writing system.

There was no money for language, but with his personality and ability as a communicator and educator, he was immediately hired as a field worker responsible for explaining the land claim concept in Inuit communities.

Moreover, he could “piggyback” his language initiative at the same time.

Then as now, tampering with language was politically divisive and there was no appetite for switching from the syllabic writing system to the Roman alphabet or vice versa.

Kusugak’s work led to the creation, by the end of the 1970s, of the new dual-orthography writing system, where a new syllabary ran parallel to a new Roman system.

But in the end a standardized Inuktitut language and writing system remained an unfulfilled dream. However, a comprehensive Inuit land claim settlement prevailed and with it the larger dream of creating Nunavut.

He also played a pivotal role in naming the new territory and designing its colourful flag.

The Nunavut land claim struggle was uncharted waters, and Jose saw “the lack of understanding on the political issues of the day among Inuit” as a major obstacle.

He joined CBC North to ensure the land claims message would reach Inuit across the arctic.

“He had done remarkable work regarding Inuit culture and language and we needed his ideas and energy,” Ward said.

Kusugak received the CBC president’s award in 1998 “for remarkable achievement in raising the standard of Inuktitut radio broadcasting.”

In November 2010, CBC’s Inuit Services Committee, which he founded years earlier, presented him with Elijah Menarik Award for challenging Inuit listeners and broadcasters “to speak, listen and think from their shared cultural and linguistic strength — Inuktitut.”

Nationally, he made a remarkable contribution towards instilling Inuit identity in Canada’s collective consciousness.

He was elected president of Inuit Tapirisat of Canada in 2000. At the time, the Government of Canada was pursuing what he called a “one size fits all” policy, meaning Inuit issues were being addressed under a broad First Nations umbrella.

At a meeting with Paul Martin, the former Prime Minister, he attacked a blatant contradiction in the government’s prized principle of multiculturalism.

Why, he asked “does Canada claim to be a great multicultural society and at the same time insist on a melting pot for Aboriginal Canadians? Inuit are not Indians!”

Paul Martin was flabbergasted, but not defensive. He promised changes and within weeks, “Inuit specific” became a familiar and acceptable term within the public service.

“Jose made a big impression on me,” Martin said. “He was one of the stars at our Kelowna first minister’s meeting. He had such a unique ability to use humour to make his point.”

When he first used the phrase at a meeting with the premiers of Canada’s provinces and territories, he received immediate and resounding approval, especially from Newfoundland’s Danny Williams. “Mr. Kusugak, those words — Canadians First — really moved me.”

It was a remarkable endorsement, considering Premier Williams was once so entrenched in a dispute with the federal government that he removed the Canadian flag from provincial buildings.

Jose raised the national Inuit profile higher by changing the name of the national organization to Inuit Tapiriit Kanatami, meaning “Inuit are united in Canada”, and adopted a new logo: the four Inuit regions represented by joined hands embracing the maple leaf.

He returned home to Rankin Inlet to be closer to his family in 2006 after serving two terms as ITK president.

A year later, he returned to regional politics, becoming president of the Kivalliq Inuit Association. And during the campaign period for the recent Nunavut Tunngavik by-election, he served as acting president of NTI.

At the time of his death, he was negotiating with mining companies to ensure Inuit benefit from resource development in the region and that the terms of the land claim agreement, including environmental protection are respected.

He had also served for many years as on the board of Nunavut Sivuniksavut, a unique college program based in Ottawa to assist Inuit youth prepare for educational and career opportunities.

Even before his death, tributes began pouring in. Arctic College, on whose board had sat for many years, opened a special website for tributes as a response to his decision to speak in public about his illness.

After he was diagnosed with cancer last spring, he called lifelong friend and CBC broadcaster William Tagoona. “I wasn’t one bit surprised” Tagoona said. “He’s always been open about everything.”

He told Tagoona and his listeners on CBC that he wanted to encourage others to take advantage of the medical facilities that Inuit now have and to go to the nursing station when they are feeling ill. He and William continued to talk frequently and publically as his illness progressed.

Jose Kusugak leaves behind a remarkable legacy, and family, including his wife Nellie, whom he credits for looking after him every moment of his illness “It was never when am I going for my treatment? It was always we are going for our treatment!”

He and Nellie had four children: daughters Alana, Alicia and Special, and a son, Pujjuut, who this past Dec. 13 was elected mayor of Rankin Inlet. They also have 13 grandchildren.

He is also survived by seven brothers: Michael, Cyril, Peter, Johnny, Lorne, Sean and Sikkate as well as three sisters: Monica, Joan, and |Jean. A fourth sister, Donna, preceded him as well as his mother Theresa and father Thomas.

During his final days he put his life in context with three simple words. “I was blessed.”

Family was his priority, though he regretted spending so much time away from them, His passions were music, sports and of course politics, but it was his humour that sustained him.

“Every situation has a funny side to it. We owe it to our soul and spirit to laugh and see the sunny side of life.” To the end, he never failed to do that.