A wind turbine designed with the Arctic in mind

“We think it is an ideal solution for Nunavut” 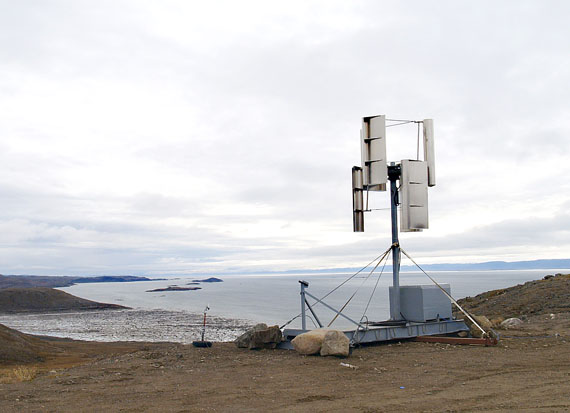 A vertical turbine windmill spins outside the Arctic Winter Games arena in Iqaluit Sept. 23. Nunaworks of Iqaluit hopes to begin manufacturing and selling the windmill within Nunavut. (PHOTO BY CHRIS WINDEYER)

A pair of entrepreneurs showcasing a novel redesign of the traditional wind turbine turned more than a few heads at the Nunavut Trade Show Sept. 23.

James Selkirk and Ronald Drews are the partners behind Nunaworks, a company that wants to market vertical axis wind turbines made by Saskatchewan’s VBine Energy.

“It was designed to be simple and durable for Northern climates,” said Drews, Nunaworks’ managing partner. “We think it’s an ideal solution for Nunavut.”

Traditional wind turbines generally haven’t fared well in the North. High winds and cold temperatures often prove too much for the machines, which usually aren’t built with an Arctic climate in mind.

VBine turns the wind turbine on its side and replaces the standard long, slender blades with six rectangular blades that resemble the front end of a bulldozer. That design change allows for fewer moving parts, said Selkirk, Nunaworks’ president, which means less maintenance.

The design of the blade also means that it can produce power at low wind speeds, hitting optimum output at around 30 km/h. Selkirk said that at wind speeds over 50 km/h, wind starts to blow over the blades, producing no more power, but also reducing the chance of damage to the system.

The current VBine model generates up to 5 kilowatts of power and can be strung together to form micro wind farms. Each generator costs around $35,000, plus the cost of constructing a tower.

But the tower can come cheap. The generators are small enough to be mounted on recyclable material. The one powering carvers tools outside the Nunavut Trade Show Sept. 23 was mounted on a large kamotiq and secured with rocks.

In fact, Selkirk viewed the loads of scrap metal the City of Iqaluit recently had shipped out as a lost opportunity.

“The crushed a whole bunch of eight-inch tubing (that) would have been perfect,” he said. “We want to use local materials and junk.”

Selkirk envisions a market for the turbines from municipalities looking for reliable backup power systems or to save money powering specific utilities.

He also said the Vbine is quiet and could be used at hunting camps where people could generate power without creating noise that would scare off animals. “You wouldn’t hear the noise because the wind would be making more noise,” he said.

Drews said the turbine has already been cold-weather tested in Saskatchewan, where it faced —50 C temperatures and high winds. At the trade show, Nunaworks was seeking partners for a location to test the turbine in Nunavut this winter.

If all goes according to plan, the company hopes to eventually market the turbine elsewhere in the circumpolar world.