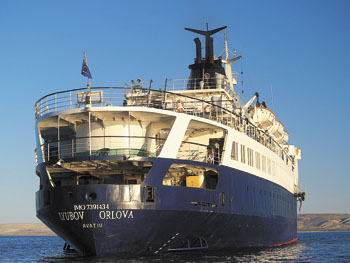 From July 23 to Aug 6, Makivik Corp. will charter the Lyubov Orlova as a mobile retreat centre for at-risk youth between 14 and 21, along with 40 support staff. (FILE PHOTO)

A group of Nunavik youth will get to cruise the Arctic this summer as part of the first wellness retreat of its kind.

Cruise North plans to host about 70 young Nunavimmiut as part of a two-week retreat next month.

The voyage will be filled with workshops aimed to teach “tools to lead a healthy life,” its organizers say.

“We’re hoping they’ll take away a sense of adventure,” said Cruise North’s Jason Annahatak, “and a sense of esteem that they’ve accomplished something great.”

From July 23 to Aug 6, Makivik Corp. will charter the Lyubov Orlova as a mobile retreat centre for at-risk youth between 14 and 21, along with 40 support staff.

There will be a number of workshops offered throughout the two-week session, including leadership training, group therapy and creative arts, Annahatak said.

The staff on-board will include a psychotherapist, social workers, elders and healers. There will be a number of artists there to lead workshops too, including a hip-hop trio and a muralist from Iqaluit, he said.

As a result, Annahatak hopes the cruise will offer a good balance of healing, support and fun for the participants.

The ship is to depart from Iqaluit, travel up the coast and across to Greenland before making its way to its end point in Kuujjuaq. The cruise will offer a typical tourist experience, Annahatak said, by making visits to communities along the route.

“People pay a lot of money for this kind of experience because it’s so unique and fun,” he said. “I’m hoping it will be really exciting experience for these youth.”

Annahatak has worked for Cruise North as an expedition guide for a number of years, where he participates in ongoing training programs for Inuit youth, in cooperation with the Kativik Regional Government.

“This time around, we thought we could offer something else to the region,” he said.

Annahatak took to the airwaves earlier this spring to promote the event and invite youth to call in.

The cruise sought young people experiencing difficulty at school and in relationships, youth who had experienced a trauma and those struggling with depression or substance abuse.

“We didn’t want to stigmatize it, but we had to explain that the cruise was geared to mental health and wellness,” Annahatak said. “The fact that it’s on a cruise ship definitely helped.”

There will be no alcohol on-board the ship for youth or staff, because the retreat is geared to youth with possible substance abuse problems.

“I am a bit concerned that some of these youth will be homesick or anxious,” Annahatak said. “But that’s why we have such a large staff, the majority of whom are Inuit. We’re hoping to make this as homey, comfortable and culturally relevant for this group as possible.”

Annahatak did not what to disclose the overall cost of operating the two-week retreat but said it was paid for through Nunavik’s Ungaluk program as well as through other regional sponsors.