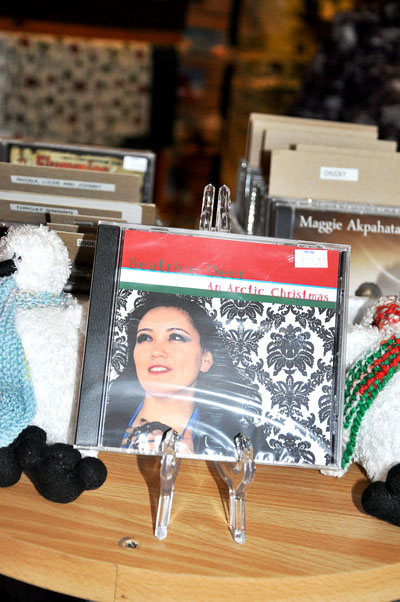 “We’ll frolic and play — the Inuit way — walking in a winter wonderland,” croons Beatrice Deer on her latest holiday album.

The Quaqtaq-raised singer never thought she’d be welcome for Christmas dinner in so many households across Nunavut and Nunavik.

But Deer’s voice will undoubtedly spread holiday cheer with her latest offering, An Arctic Christmas, which has sold more than 900 copies over the past month.

The nine-song CD offers new and old Christmas standards in both English and Inuktitut.

“I’ve always wanted to make a Christmas album. I just never got around to it,” Deer said. “There aren’t many Christmas albums in Inuktitut out there.”

Deer remembers listening to, and loving, Inuk chanteuse Susan Aglukark’s album Christmas in the early 1990s, but says there haven’t been many other Inuktitut-language holiday CDs made since.

The old hymns “O Holy Night” and “Silent Night” — which appear on Deer’s album — have already been translated into Inuktitut. Deer herself translated the song “Christmas Time is Here.”

Deer’s creative partner and husband Charlie Keenan does not appear on An Arctic Christmas, but throat-singer Evie Mark took the photographs for the CD’s jacket.

The CDs are selling fast at stores in Kuujjuaq and Iqaluit, from friends’ homes across Nunavik and more recently on iTunes.

Deer has had plenty of attention, too — CBC Radio 1 played a track from her album two weeks ago and she’s had interview requests from other media.

But the strangest request so far has been an email from a group in Germany who plan to learn some Inuktitut over the holidays, so they can sing along with An Arctic Christmas.

“I’m supposed to send them some lyrics this week,” Deer laughed.