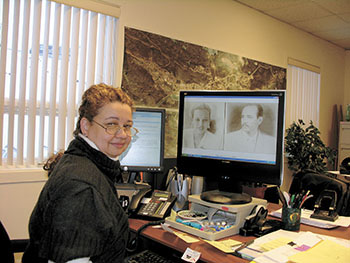 Michèle Bertol, Iqaluit’s long-serving director of lands and planning, was dismissed from her job Jan. 26. So far, city officials won’t say, claiming that it’s an employment issue. “News like that rattles you,” Bertol said. (FILE PHOTO)

Michele Bertol is out as Iqaluit’s director of planning and lands, Nunatsiaq News has learned.

Sources said Bertol was no longer working for the city after a meeting on the morning of Jan. 26.

Bertol, who worked for city hall for seven years, said she was fired, but also didn’t want to discuss specifics.

Bertol’s departure comes the day after a tense city council meeting, where councillors shot down a major development proposal for the area around Creekside Village, also known as White Row.

Nunastar, which holds leases for three lots near White Row, wanted to build four apartment buildings containing 118 apartment units. Councillors were skeptical about elements of the proposal, which had Bertol’s clear backing.

In a telephone interview Jan. 27, John Hussey, the city’s chief administrative officer, said Bertol’s “dismissal” had nothing to do with the Jan. 25 council meeting.

Planner Arif Sayani, who had been the acting director of public works, will now take over as acting head of planning and lands while the search commences for a replacement.