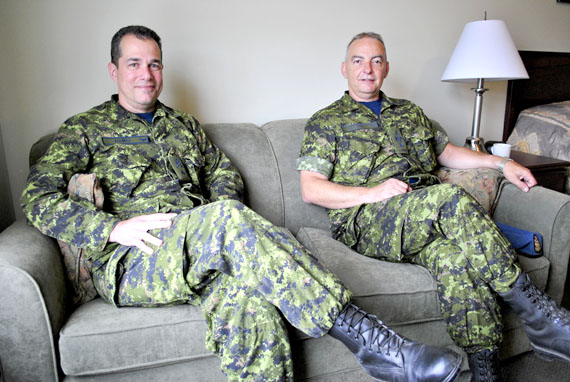 Clad in ankle-high combat boots and green camouflage battle-dress, Brigadier-General Guy Hamel allows himself a little smile, then makes sure the newspaper reporter gets the message.

Hamel, who on June 18 took command of Joint Task Force North, the small Canadian Forces entity responsible for the defence of the three northern territories, arrived in Iqaluit July 28.

Relaxing on a small couch inside a hotel suite on the third floor of Iqaluit’s Nova Inn, Hamel took some time out to do one of the big tasks that come with his new job: familiarize himself with the community and communicate with the public.

But the biggest item on his to-do list right now is to run the 2010 version of the eastern Arctic’s annual Operation Nanook military exercise, which starts Aug. 6

This year’s version will see about 900 personnel operate over a vast area stretching from Pond Inlet to Resolute Bay and areas just south of Grise Fiord.

Until Aug. 26, Canadian air, sea and land forces will test their ability to work with each other, with a variety of civilian agencies, and with allies from Denmark and the U.S.

By the time they’re finished, they will have practiced a response to a mock oil spill, albeit a spill in which no actual oil is spilled.

“It’s all about putting everything together to respond in a timely fashion, meeting demands throughout the territory from government at all levels,” Hamel said, referring to the rapid reaction capability that JTFN is training itself to develop.

“Operation Nanook gives us the ability not just to practice, but to enhance our capabilities by doing tests,” Hamel said.

And like all other federal civil servants based in the Arctic, Hamel makes sure to put in a plug for the two big policy scriptures, devised by his political masters in Ottawa, that he must follow.

“Everything we do in Operation Nanook is in suport of the four pillars of the Canada Northern Strategy and also contribute to the Canada First defence strategy,” Hamel declares.

Rumour-mill speculation has it that Prime Minister Stephen Harper will visit the High Arctic so that he can use Operation Nanook as a platform from which to make more sovereignty declarations and also announce the location of his government’s long-promised High Arctic research facility, but such a visit has yet to be confirmed or announced.

The prime minister’s office usually announces such visits less than 24 hours before they occur.

Hamel said the first phase of Operation Nanook will focus on military activities, part of which will make use of a reservist group comprising 135 troops. Drawn from land forces stationed across Canada, this group will operate in the Arctic for the first time, doing patrols and surveillance work.

“We need to train them to operate for when there is a crisis and we need to operate in the North, to become familiar with it so they can really focus on doing their job,” Hamel said.

The exercise will also make use of CH-146 Griffon helicopters to help that group do its patrol work, as well as a new C-17 Globemaster transport plane, which will carry troops and equipment to Resolute Bay. In all, the operation will make use of 10 different types of aircraft.

At the same time, Canadian naval vessels will participate in a joint exercise with vessels from the U.S Navy, the U.S. Coast Guard and the Royal Danish Navy.

“We’ve operated together in other parts of the world. It makes sense now to operate together in the Arctic, to bring the Arctic flavour,” he said.

The U.S government will contribute a navy destroyer, the USS Porter, and the USGCS Alder, a coast guard vessel normally stationed at Duluth, Minnesota. Hamel said all these ships will operate under his command during the exercise.

Another key element will be the rapid movement of troops from Resolute Bay to Pond Inlet.

“This in itself will be a big challenge, to move them by sea and by air, to again do presence patrols and surveillance and to operate in that harsh environment,” Hamel said.

For the duration of Operation Nanook, Canadian Forces will also work with at least nine civilian agencies, including Parks Canada, Environment Canada and the Coast Guard.

And, of course, Hamel says Canadian Rangers from Nunavut will perform vital work, which will include teaching southern-based troops about how to survive on the land.

The second phase of Operation Nanook will test the task force’s ability to respond to an environmental crisis, in an exercise led by the coast guard that responds to a simulated oil spill.

“In this one, the Canadian Forces are there as support for the coast guard,” Hamel said.

To that end, Environment Canada, the Department of Fisheries and Oceans, and the RCMP and Transport Canada will also get a piece of the action.

Hamel, who joined the Canadian Forces in 1979 as an artillery private with the reserves, became an officer in 1998 after spending two years at the Royal Military College in Kingston, Ont.

He rose through the ranks quickly, gaining a promotion to colonel in 2006, after which he won an appointment as commander of Canadian Forces Base Borden in 2008, and then gained a promotion to the rank of brigadier-general this past June 4.