“A new era in social change for Inuit” 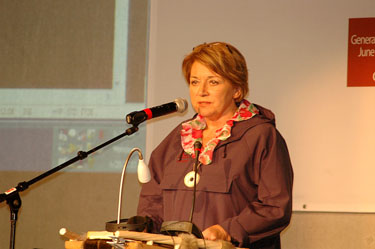 Inuit and the Inuit Circumpolar Council need to rally their “united voice” to improve the health and education of Inuit children, said Mary Simon, who spoke to the ICC’s general assembly in Nuuk, Greenland on June 28. (PHOTO BY MELISSA IRWIN, ITK)

The Inuit Circumpolar Council should use its 2010 general assembly to mark “an new era in social change for Inuit,” especially the health and education of Inuit children, Mary Simon, the president of Inuit Tapiriit Kanatami, said June 28.

“I believe there is now a sense that we must direct our attention and our expertise to addressing perhaps our greatest challenge… the need to improve the well-being of our families,” Simon told 60-plus ICC delegates from Chukotka, Alaska, Canada and Greenland at Nuuk’s Katuaq conference centre.

Simon urged Inuit and ICC to rally their “united voice” to improve the health and education of Inuit children.

As for ICC, the organization representing Inuit around the circumpolar world should become an “international advocate” for positive change, Simon said.

ICC should lobby these governments so that they start to look at the health and education of Inuit as a measure of national well-being, she said.

And ICC should also encourage research and meetings on health and education to ensure “that our children enjoy better health and better education than any generation before us.”

“I know there are no easy solutions to improving our health and education outcomes,” Simon said. “We know that turning around some of the most desperate indicators is a daunting task.

Simon told the gathering that it is “very troubling” that Canadian Inuit live in one of the most prosperous countries in the world, yet the socio-economic conditions for Inuit living in Canada resemble those found in many developing countries.

Simon pointed out that in Canada:

• 75 per cent of Inuit youth do not complete high school;

• the suicide rate among Inuit is 11 times the Canadian average;

• many Inuit communities lack the most basic mental health and support services;

• the incidence of tuberculosis is such that, “if we were not citizens of Canada, we would not be allowed entry into our own country;”

• many of Inuit communities suffer from alcohol and drug abuse; and,

But Simon also praised the attention given to Inuit in Canada by Prime Minister Stephen Harper’s Conservative government, mentioning his regular visits to the Arctic and his appointment of Nunavut MP Leona Aglukkaq as national health minister.

Simon said 2010 heralded “another potential shift in policy” when the federal government, in its speech from the throne earlier this year, said Canada planned to endorse the United Nations Declaration on the Rights of Indigenous Peoples.

“We anxiously await a formal statement from the government supporting the declaration without any preconditions, “ Simon said.

That commitment, and the 2009 apology to residential school students, are, Simon said, “an indication that issues of profound importance to us are making it to the agenda of our federal government.”

Simon was one of the negotiators for the ICC Charter, when the circumpolar Inuit body met for the first time in Barrow, Alaska, in 1977.

“The ICC event still serves as a reminder to Inuit, and to those who follow our politics that Inuit circumpolar origins are quite unique in this world,” Simon said.

But she also said the general assemblies still show many “complex international issues” are also connected to “basic human issues affecting the well-being of our families.”