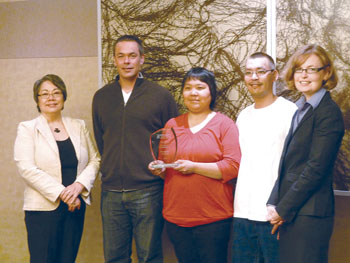 The Ilisaqsivik Society, which runs a community-based wellness centre in Clyde River, has received $10,000 from the Kaiser Foundation’s national awards for excellence program.

The Kaiser awards recognize individuals or community groups who have made exceptional contributions in the field of mental health and addictions.

“Ilisaqsivik Society has made and continues to make valuable contributions towards community wellness programming in Clyde River, and it is a pleasure to be asked to present this award,” Aariak is quoted as saying in a foundation news release. “The dedicated staff continues to offer help to individuals and families in making positive life changes to those in need.”

But even as Gearheard accepted the award for Ilisaqsivik, acknowledging the centre’s role as “a place that is accessible, culturally appropriate and ultimately a place where people can access a wide variety of healing programs,” the hard truth is that Ilisaqsivik faces an uncertain future.

It’s so uncertain that Gearheard, reached by Nunatsiaq News in Ottawa, said he recently bought a lottery ticket for a $50-million draw, hoping that if he won, this money could help Ilisaqsivik’s perilous situation.

“If we shore up the financial end, it would be a rock solid organization,” Gearheard said.

The centre, which runs more than 30 wellness-related programs, has only project’s funding lined up after March 31, 2011.

At the same time, Ilisaqsavik no longer receives any Aboriginal Healing Foundation money, which used to cover about 25 per cent of its budget.

Project’s are Ilisaqsivik’s lifeblood, because the centre receives no core funding from the GN for its basic operations.

“It’s a scary position to be in,” said Gearheard. “We’re doing great work, but it takes money. We’re not just pulling ourselves up by our bootstraps. We need help to do it.”

Ironically, Health Canada, the GN and Nunavut Tunngavik Inc. are in the process of drafting community wellness plans using Ilisaqsivik as an example, he said.

“Money is being spent on replicating Ilisaqsivik, but money isn‘t being invested in keeping Ilisaqsivik open, “ Gearheard said. “We’re promoting community wellness, but because of the way our funding is, we can’t protect the wellness of our own employees.”

Ilisaqsivik provides employment and training to as many as 50 full- and part-time workers in Clyde River. With the exception of one employee— Gearheard— all are Inuit.

In 2005, Ilisaqsivik was in debt, but managed to fund-raise and survive.

Gearheard said the message now is that Ilisaqsivik will not close its doors.

“We fought and we’ll continue to fight,” he said. “My message is that more and more Ilisaqsivik is being recognized regionally and nationally. But at the same time, it’s not being supported at the basic core funding level. It would be sad if this really good example of how community-based wellness program would not be able to survive.”