Geography professor offers $500 prize for pic of your favourite place 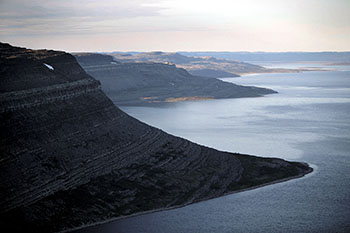 People in Umiujaq can submit photos of the landscape around their community— and win prizes, thanks to a French researcher’s unique photo project. (FILE PHOTO)

If you live in Umiujaq, the community closest to Nunavik’s future Tursujuq park, get out your camera and start snapping photos of your favourite places.

You have less than a month to enter photos of landscape in and around Umiujaq — and if you enter you just may win a $500 prize.

The contest’s promoter is Fabienne Joliet, a French geography professor from Angers, who received money from France’s polar institute to sponsor the contest.

“What is your favourite landscape?” is the theme of the contest, which invites people in Umiujaq to submit photos of lands bordered by the Nastapoka River to the north, Clearwater Lake to the south and over to the Nastapoka Islands in Hudson Bay.

For Joliet, a landscape is “any place is a place where you’re happy to be, where you feel good because this place is pleasant, and you can do what you like to do.” It can neither be a picture of a thing or an animal, or a person who may appear in your landscape, she said.

Joliet told Nunatsiaq News the 50 or so entries she’d like to see will provide some insight into how people look at the land.

As well, Joliet said she will put all the photos into an album for the community to keep — and that these photos may also find their way into the planned interpretation centre for Tursujuq Park.

The photo contest started April 26 and ends August 10 — and to date Joliet has only received a handful of entries, which she received when she visited Umiujaq in the spring.

But it’s not to late, she said.

Joliet, who returns to Umiujaq next month, urges many to enter before she returns to the community August 5.

The deadline for entries is August 1o.

Each photographer— who must have lived in Umiujaq for at least a year— can enter one high-resolution digital or printed photo and must answer a few questions about the photo, Joliet said.

Joliet retains the rights to use any submitted photos afterwards, but she emphasized that the project isn’t for her— but for the community and that the photo album will remain in Umiujaq.

Once all the entries are in, a jury with representatives from Quebec, Nunavik Parks and Avataq cultural institute will decide on three prize winners, who stand to win from $300 to $500.

Umiujaq residents will also be able to vote for their favourite photo when Joliet will be at their community’s municipal office.

The winner of peoples-choice award gets $500.

The awards ceremony is planned for August 16 in Umiujaq.

Next year Joliet wants to organize a similar photo contest in Kuujjuaraapik and Whapmagoostui, the twin communities located right to the south of Tursujuq.

For more information — or to enter a photo — contact
Annie Kasudluak at the municipal office
Email: akasudluak@krg.ca