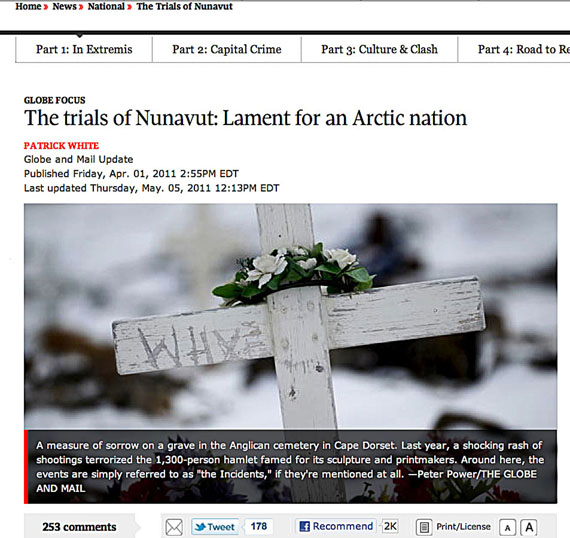 Tagak Curley, the Nunavut health minister, said May 31 that he’s not happy with the portrayal of Nunavut contained in a huge multimedia package the Globe and Mail produced this past April 1. “I get angry when I read the national newspaper that tries to portray Nunavut as hopeless, that there’s not hope, the leaders have their face under the snow and they’re not willing to admit it,” Curley said. (SCREEN GRAB FROM THEGLOBEANDMAIL.COM)

Health and social services minister Tagak Curley launched an angry broadside May 31 against the author of a Globe and Mail story in which Curley appeared to downplay the problem of suicide in Nunavut.

The article, headlined “The trials of Nunavut: Lament for an Arctic nation” was written by Globe reporter Patrick White and published this past April 1 as part of a sprawling multimedia package that included text, video footage, still photography and animated graphics.

In a 7,300-word feature story at the centre of the package, White tied the trauma of colonization and residential schools to Nunavut’s high levels of violence and suicide and its governance struggles since the creation of the territory in 1999.

Curley accused the Globe of running an exploitative, insensitive piece that disparaged Nunavut.

“I get angry when I read the national newspaper that tries to portray Nunavut as hopeless, that there’s not hope, the leaders have their face under the snow and they’re not willing to admit it,” Curley said.

“When I met that reporter, I said one suicide is enough, it’s too many,” Curley continued, turning to face reporters in the media booth behind him.

“I spent half an hour with him mister Speaker, and yet what did you read? Five words. Mischaracterization of what I said.”

The story quoted Curley as saying “suicide isn’t such a big problem any more” in Nunavut.

Statistics provided by social researcher Jack Hicks show Nunavut suffered a high of 36 suicides in 2002. The figure has dropped since then, but never lower than 24 suicides in 2007. In 2010, 29 Nunavummiut died by suicide.

Curley also accused the Globe of exploiting Leo Nangmalik, the Repulse Bay man who agreed to be interviewed in November, 2010 at his home by White and for a video interview shot by Globe photojournalist Peter Power.

Nangmalik talked about the abuse he suffered at the Sir Joseph Bernier residential school in Chesterfield Inlet, and his subsequent time in prison, his struggle to be a good father and his thoughts of suicide.

Just days before the Globe story was published, Nangmalik, 50, died by suicide.

Curley said reporters are not trained to deal with people who have “mental health and psychological problems.”

“It’s better that they leave them alone.”

Reached in Toronto, White said he stands by the story and Curley’s quote.

He said photographer Peter Power took Nangmalik aside after the interview and explained exactly how the story would roll out and that it would be seen by many people.

White said Power asked Nangmalik if there was any information he wanted taken out. Nangmalik said no.

“He [Nangmalik] wanted the story to go out to as many people as possible,” White said.

In the story itself, Nangmalik is quoted as saying he felt “a peace” after talking about his life. “Maybe this is what we need, this talking.”

Curley’s remarks came as dozens of Nunavummiut who lost loved ones to suicide packed the assembly gallery.

Some held up photos of their loved ones as Quttiktuq MLA Ron Elliot urged the government to issue its long-delayed suicide prevention action plan as soon as possible.

That action plan was supposed to have been delivered by the end of January, but it remains unclear when it will be released.

Becky Qilavvaq, president of the Embrace Life Council, said the action plan is coming soon and is urgently needed.

She said the goal should be to reduce Nunavut’s suicide rate to the national average. Right now, it’s nearly 11 times the national rate.

“We are in crisis with the numbers that we are seeing here with the size of our population,” Qilavvaq said.