Nunavik’s trilingual star takes her songs across the country 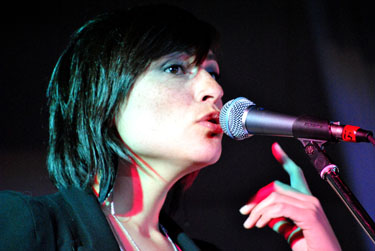 Singer Elisapie Isaac is busier than ever this summer, with a string of high-profile performances across Canada, as well as a new music video. (FILE PHOTO)

If you want to see Nunavik singer Elisapie Isaac perform this summer, be prepared to travel.

Isaac, who performed July 3 at the Montreal Jazz Festival, is crisscrossing Canada this summer.

First, she’ll be on stage at 9:30 pm on July 14 at Place d’Youville in Quebec City’s old town as part of Quebec City’s summer festival.

Then, this weekend, she travels across Canada to perform at the Vancouver Folk Music Festival.

Isaac will perform with the Lilith Fair at Montreal’s Bell Center on July 29.

Then she heads off on a solo tour of Quebec.

If you can’t keep up with Isaac’s travels and still want to see her perform, she has a new music video of her song, “Moi Elsie” posted at http://bit.ly/9OmrsR.

“Your contract is over,
You’ll catch a plane at the end of the month,
Listen to me, I’ll be brief,
You’ll leave a hole here- and not just for me…

Remember this name, Elsie,
Like the wind off the tundra,
And if someday you give your heart
I’d like so much for it to come to me…”

You can find the complete lyrics in French at: http://pisiit.blogspot.com/2009/10/elisapie-isaac-moi-elsie.html