Getting to the root of Arviat’s food insecurity 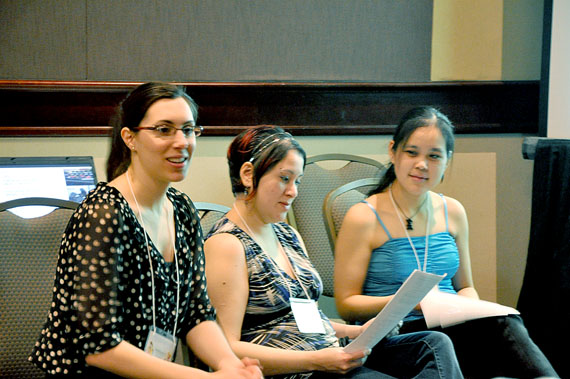 The two young women from Arviat are at a conference presenting a research project on access to nutritious food among local women.

It’s nerve-wracking, but the women know they have a captive audience.

Statistics tell part of their story: Arviat, one of the largest communities in Nunavut, has the highest birth rate in the territory.

More than 60 per cent of its population is under the age of 16.

Almost half of the community’s families are on income support and between 80-150 of them use the local food bank every month.

And that number is growing.

When Arviat’s local health committee decided to take the problem into their own hands, they drew bits of funding from various projects to hire Curley and Panigonak as research assistants to help track data.

“We knew that food security was an issue, but there was little evidence available,” Panigonak said. “It’s up to us to promote health and support in our community.”

So for the past several months, Panigonak and Curley have worked alongside McGill University researchers Maude Beaumier to interview local women and other community leaders.

Their goal: to get to the root of the “food insecurity” among Arviat women in order to present a long-term strategy that will improve women’s – and their families’ – nutrition and overall health.

Their research will offer the baseline information the community needs to shape that strategy, because the issue is far from black and white.

Arviat’s health committee chair Shirley Tagalik points out that local women do not actually identify themselves as food insecure –meaning they believe they have access to food.

“On the other hand, they are going to the food bank or asking for money to buy – for the most part – non-nutritious food for their children,” Tagalik said. “So we assume that with so many families reliant on the food bank, that there is food insecurity.”

But Arviat women’s role as family caregivers makes them the target for the research.

As Tagalik says, women have access to plenty of country foods in Arviat, which is the staple of their diet.

The problem is, the children aren’t eating it as much. Tagalik credits that to lack of public health information about how to eat a balanced diet.

Local focus groups will be held throughout the spring will give researchers a clearer picture of that, and present some possible solutions.

In Igloolik, for example, a similar study was carried out in 2008-09 which found the majority of women there worried about how to access nutritious food themselves and their family.

That study produced recommendations for the creation of education programs, better hunter support and a local cooking class.

In Arviat, research will continue through the spring and findings will be presented to the community in August 2011.

Curley and Panigonak, who are involved with a handful of other community initiatives, are optimistic of their progress.

“Maybe people are going to want to participate more,” Curley said, “and maybe we’ll get more funding for future projects.”

This particular study on determinants of food security among Arviat women is funded through Health Canada’s climate change and health adaptation program.

More than 30 community-based projects in northern First Nations and Inuit communities have been funded through the program since 2008.

Curley and Panigonak were among those researchers gathered at the program’s Pan-Arctic results workshop in Ottawa Feb. 8 to Feb. 11.