In Nunavut, doctors are few and far between

Northerners feel the country’s doctor shortage much more acutely than southern Canadians, says the latest Conference Board of Canada look at disparities between the two regions.

In a project called Somebody Call a Doctor, researchers use 2006 census data to determine that the population-to-physician ration in the North can be 2,000 to one and even higher, depending on the region, compared to 400 to one in southern regions.

The region with the fewest number of doctors per 10,000 population is northern Saskatchewan (3), followed by Nunavut (5), and then northern Newfoundland and Labrador (8).

Northern Quebec — here, a region that encompasses Nunavik as well as anything north of the St. Lawrence River — registered 18 doctors per 10,000 people.

In comparison, most southern regions all have at least 20 doctors per 10,000.

The exception on the map is Yukon territory, which counts the highest doctor-population ration in the country, whose 118 doctors produce a whopping ratio of 38 doctors per 10,000.

The study did not look at communities that have regular access to a doctor, but acknowledged the reality that many northerners must travel to see one.

“Not only are there fewer doctors, northerners frequently have limited access to them,” said project director Derrick Hynes.

“Northern Canadians often have to be transported hundreds or even thousands of kilometres to reach a doctor, which increases the risks to human health and security, and health care costs.”

The Conference Board of Canada’s Somebody Call a Doctor map is part of an ongoing series called Centre for the North, a program that looks at the similarities and differences between Canada’s North and South and among northern regions. 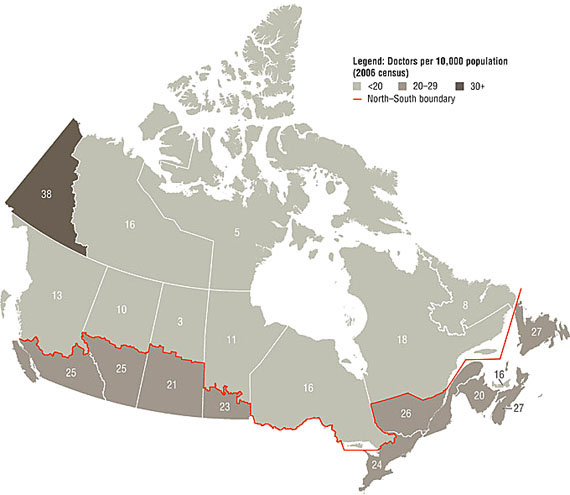 The Conference Board of Canada’s latest map shows Nunavut has one of the lowest doctor to population ratios in the country, with five doctors per 10,000 people. Only 15 resident doctors serve the territory, compared with 65 in the Northwest Territories and a whopping 118 doctors in Yukon. (IMAGE COURTESY OF THE CONFERENCE BOARD OF CANADA)