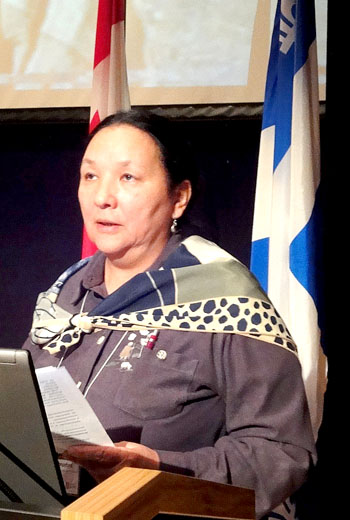 Resource development has only led to more misery for northern Russia’s indigenous peoples, Larissa Abryutina from the Russian Association of the Indigenous People of the North, tells a Laval university conference on the challenges of sustainable development and sovereignty in the Arctic on May 18. (PHOTO BY JANE GEORGE)

QUEBEC CITY — Many of the 280,000 indigenous peoples of Russia’s north are watching their communities and cultures teeter on the brink of extinction as economic hardships force them to leave their homelands and migrate in droves to the city.

Many of those who remain behind have abandoned traditional values and become “profit-driven in their search for compensation for their traditional lands,” Larissa Abryutina of the Russian Association of the Indigenous People of the North said May 18 in a presentation to a conference at Laval University on sustainable development and sovereignty in the Arctic.

Like other speakers, Abryutina revealed a striking irony: that it’s much easier to find bad examples of development and self-determination in the Arctic than good ones.

Abryutina, a Chukchi, is herself a casualty of the desperate choices facing northern Russian indigenous people: a doctor of radiology, she left her home region of Chukotka due to its declining standard of living.

Since the 1990s, and the fall of the Soviet Union’s Communist government, things have gone from bad to worse for northern indigenous people in Russia, Abryutina said.

And their life expectancy has fallen to between 40 and 45 years due to the environmental pollution, alcoholism and poor health care.

Russia was “naïve” to think indigenous peoples would be able to deal with the new capitalist economy, she told the gathering.

Under the Czars, who ruled Russia until 1917, they were left on their own, and only had to pay an annual tithe to their rulers.

Then, the Soviet era brought many changes, including improvements in education and health care, to northern Russia’s indigenous people, Abryutina said.

But Communism also threatened traditional activities, because nomadic peoples were collectivized into farms and communities where Russian was the language of daily life.

Many ended up dispossessed and depressed, with no land or culture.

Then, the economic reforms of the 1990s wiped out all positive achievements by decentralizing administration to the regions left in what became the Russian federation.

These regions lacked the resources to provide even the most basic services in health or education, so many villages ended up deserted and were finally closed down by the government, she said, leaving industry as the leading player.

The Nenets, the most numerous indigenous group in northern Russia, numbering 42,000, have seen gas and oil developers plunder their reindeer grazing territories, damaging the land without providing any compensation or mitigation measures, Abryutina said.

Packs of wild dogs — the descendents of pets left behind by transient workers from the South — now roam the Yamal, terrorizing the Nenets and their reindeer.

Development has also produced contaminated water, and even when industries offered compensation for the damage, locals have “never seen their clean water again,” she said.

Even among a non-indigenous Arctic people, Icelanders, the bleak economic situation shows the disastrous result of unsustainable economic development.

In Iceland, where banks went belly-up last year because they lacked the assets to cover their debts, many families and businesses now faces bankruptcy and unemployment has tripled.

Ivor Jonsson, a former business professor at the University of Greenland, told the Laval conference that business interests controlled Iceland’s media and educational institutions, leading to a lack of criticism, corruption and today’s economic chaos.

These have been compounded by the recent volcanic eruptions in Eyjafjallajökull, he said.

Greenland’s decision to use resource development as its financial springboard to independence may also backfire if it lacks the social capacity to benefit from the bonanza, other speakers said at the conference, which took place May 17 and 18.

A recent circumpolar study and comparison of six key economic factors in the Arctic highlights the possible negative and positive impacts of resource development, said Gerard Duhaime, a sociology professor at Laval who holds a Canada research chair on comparative aboriginal conditions.