Inuit in the city: loathed and unwanted? 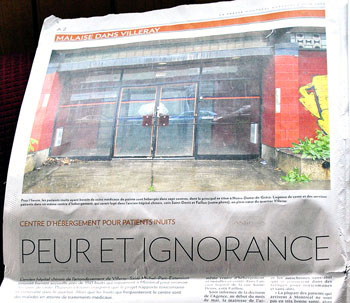 Fear and ignorance. That was how the French language daily La Presse described the reaction of residents of a north-east Montreal district when they learned that health authorities are studying the idea of locating an Inuit patient home within their neighbourhood. (FILE PHOTO)

More than one in five Canadian Inuit now live outside the Arctic, where, with some notable exceptions, they live as a tiny and mostly invisible ethnic minority within big and medium-sized cities scattered from one end of southern Canada to the other.

So reported Statistics Canada in 2008, after making its last serious attempt, in 2006, to count such numbers. In the 2006 census, they found also that the proportion of Canadian Inuit living in the South increased 62 per cent over the previous 10 years.

There’s no reason to believe this rate of migration from North to South got any slower between then and now, so common sense suggests the current proportion of Canadian Inuit living outside the Arctic is now greater than one in five.

Given all that, contemplate the following words. They’re from a handbill distributed throughout the Villeray district north-east of downtown Montreal, written by residents who learned a couple of months ago that health authorities plan to locate an Inuit patient home within their neighbourhood. The same text also appeared on a website that has since been taken down:

“This project will inevitably create a major increase in criminality within your neighbourhood, prostitution, trafficking in drugs such as crack and methamphetamine, the presence of syringes, condoms, pieces of broken bottles on our sidewalks and alleys and in the parks, vandalism, thefts and violent crimes against persons, vagrancy, the smell of urine, and so on.”

If this isn’t racism, then the word “racism” has no meaning.

For those who wrote this vile tract, the word “Inuit” conjures images of filth, disorder and every possible form of degraded human behaviour. It rests on the assumption that all Inuit own these qualities simply by being Inuit. This is the essence of racism: the belief that all members of a given race possess certain attributes simply because they are members of that race.

In various articles published in the French-language press, some people tried to explain it all away, saying the residents of Villeray believed, mistakenly, that health officials planned to put an addictions treatment centre into their district.

That excuse doesn’t cut it. Anyone even vaguely familiar with addictions treatment facilities knows that such places ban the possession and use of all drugs and intoxicants among all clients and often among all staff members.

In the same document, local residents suggested that Inuit patients would bring with them the criminality and social problems that flourish on the west end street where their current patient hostel is located.

This too, is a ridiculous suggestion. Those social problems existed there long before the current Nunavik House patient home ever opened in that locale 10 years ago and will persist long after it’s moved. It’s because of these social problems that the Inuit of Nunavik demanded their regional health board move their patient home to a better area.

None of this excuses the pandering cowardice of the area’s municipal leader, Anie Samson, mayor of the Villeray-Saint-Michel-Park-Extension borough, who told Nunatsiaq News in an interview that residents of Villeray are “pure-white and separatist” and who then defended her constituents’ campaign to keep it that way.

This uproar may concern a patient hostel that’s provides a basic health service specific to the Inuit of Nunavik. But all Inuit living in Montreal, whether their roots lie in Nunavut, Nunavik, Labrador or the Northwest Territories, ought to be worried about this. So too, should Inuit living in other urban centres across the country.

If one group of ignorant, fearful bigots are capable of forming such a distorted view of Inuit, then so are others. This affair suggests that when Inuit living in southern Canada attempt to rent apartments, apply for jobs or seek services, there’s a grave risk that in some places they’ll be thwarted in their efforts by racism and bigotry.

To guard against this, the four regional Inuit organizations, and the national organization that they control, Inuit Tapiriit Kanatami, must develop a greater appreciation for their numerous beneficiaries in southern Canada. To that end, Pita Aatami, the president of Makivik Corp., two weeks ago issued an eloquent denunciation of the anti-Inuit campaign. But that’s just a start. As the migration of Inuit from North to South continues to grow, so too will the needs of urban Inuit, who will require strong voices to defend their rights and interests.

Some people have argued that the social problems of aboriginal people could be mitigated if aboriginal people were better integrated into mainstream Canada. These arguments often make sense. But how can such integration ever occur in the face of persistent non-aboriginal bigotry? JB