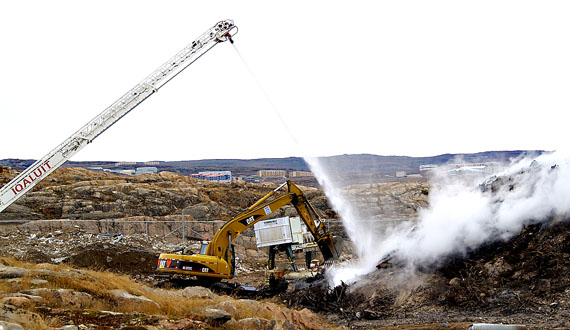 Firefighters and a city backhoe battle Iqaluit’s dump fire Oct. 1, 2010. The fire created new space in the landfill, but city officials are still pushing ahead with the development of a permanent fix for Iqaluit’s garbage headaches. (FILE PHOTO)

It might be tempting to suggest that last fall’s inferno at the Iqaluit dump lit a fire under city officials seeking a solution to the capital’s garbage woes.

But Meagan Leach, the city’s director of engineering and sustainability, said the process of finding a replacement for Iqaluit’s perennially overloaded landfill was already underway.

The city is taking its first steps forward on that file, awarding in December a $260,000 contract to Trow Associates, who will come up with a preliminary design for new solid waste facilities for Iqaluit.

The goal is to devise a long-term fix for the dump, which has been close to full for years now. Leach said the design needs to be a catch-all solution for Iqaluit’s waste management woes.

“It could be landfill, it could be incinerator, it could include recycling or composting,” she said. “All those options are going to be reviewed in detail to figure out which one makes the most sense in our community.”

“This is definitely a top priority for the city right now.”

Still, last fall’s month-long dump fire, which occasionally sent plumes of noxious smoke wafting toward Iqaluit, shutting down schools and government offices, had a silver lining for the city staffers who have to deal with Iqaluit’s enormous pile of trash.

Frank Ford, the city’s superintendent of public works, said the blaze reduced the volume of garbage and made it easier to manage the various piles of scrap metal, household waste and “combustibles” — the wood and other construction debris that caught fire in September.

“In the past, we weren’t able to segregate garbage properly because of the lack of space,” Ford said. “Well now we’ve got a little bit more space out there.”

But he said the dump will still have to close eventually, meaning the city will have to find a way to reclaim the land at the West 40 site.

Ford said one option to reduce the volume of garbage could be gasification, the incineration of garbage at extremely high temperatures to reduce smoke.

The terms of reference for the solid waste management plan calls for Trow to account for Iqaluit’s remote location, and the expense and difficulty of shipping solid waste out of the city.

That means the bulk Iqaluit’s garbage will likely continue to remain in or near the city.

“It’s kind of a wildcard because you never know [if] there’s going to be hotspots within that pile all the time as garbage deteriorates or rots….

But it needs oxygen to flare up, so as long as we don’t dig into that pile, we’re fairly safe,” he said.

Leach said the city expects the preliminary design by the end of August.