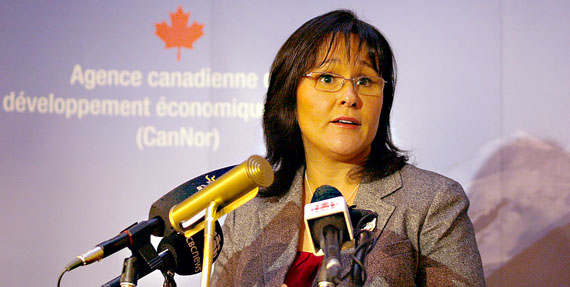 With speculation reaching a frenzied boil that there’s going to be a federal election this spring, Leona Aglukkaq would have to consider her recent Nunavut mini-tour a success.

The Nunavut MP and federal health minister got to play late-season Santa Claus, doling out $1.7 million in federal cash — mostly in Nunavut, but also to Yukon and the Northwest Territories, thanks to Aglukkaq’s role as the Harper government’s political minister for the three northern territories.

There’s $800,000 to fight TB in Nunavut, $300,000 for the successful Dechinta Bush University project in the NWT, and a smattering of economic development projects, to the tune of a few tens of thousands of dollars at a time.

But Aglukkaq also made the rounds of hamlet councils in Rankin Inlet, Taloyoak, Kugaaruk, Sanikiluaq and city hall in Iqaluit to hear about local infrastructure demands in advance of the federal budget, expected some time in March.

She likely returned to Ottawa with a lengthy list. In Rankin, council pushed for a port, airport upgrades and action on the long-proposed Nunavut-to-Manitoba road, said Coun. Kyle Sheppard.

“The most realistic at this time is probably the port,” Sheppard said. “If we could get one fairly quickly [we could] take advantage of all the upcoming economic activity in the area.”

“There could be a massive return on investment in Rankin right now,” he added.

That’s the kind of pitch the federal government wants to hear these days.

With a deficit approaching $50 billion, and a stated desire to cut that deficit to zero in the next five years, the Harper government is said to prefer projects that have a direct impact on Canada’s gross domestic product.

Still, Aglukkaq and her cabinet counterparts have been touring the country during the parliamentary break, taking part in what they like to call “pre-budget consultations” with municipal governments.

But with money so tight, Sheppard acknowledges that a big-ticket project like the road to Manitoba — projected cost: more than $1 billion — is doubtless a long shot.

Iqaluit also provided Aglukkaq with long list of infrastructure needs that never seems to get any shorter.

Some are familiar, like plans for a new swimming pool, recreation centre, fire hall and city hall.

Others, like the need to patch cracks in the dam at the city’s Lake Geraldine reservoir, are urgent, if decidedly less sexy.

“We absolutely have to ensure that we prioritize projects that meet our basic needs before we look at other needs,” she said.

And there’s another big-ticket item on the list of nearly every municipality in Nunavut: power plants.

They’re a territorial responsibility, but hamlets will be the ones who will have to deal with the mess first if any of Nunavut’s crop of aging generators fails in spectacular fashion.

Redfern said the topic came up during her meeting with Aglukkaq.

For her part, Nunavut’s MP isn’t promising any replacement plants, which would come in at a cost of tens of millions of dollars each.

Although in fairness, it’s not as if Aglukkaq can go around promising millions in federal cash for something that hasn’t happened yet.

She did appear to be open to federal funding for Qulliq Energy’s proposal for a hydroelectric dam near Iqaluit that could dramatically slash the utility’s need for diesel fuel and eventually free up more money for power plant upgrades.

“I’m very interested in hearing more about that [project] and seeing how we can reduce diesel dependency in Nunavut,” she told reporters in Iqaluit earlier this month.

But it’s clear Nunavut municipalities have given Aglukkaq an earful over their infrastructure needs, even as the federal government moves to cut spending, starting with this spring’s budget.

Aglukkaq repeated a theme she raised during a conference on Arctic infrastructure last year: pick your spots.

“We cannot meet all the demands of every community,” she said. “They [municipalities] are going to have to be very strategic in prioritizing where are the most needs for infrastructure in partnership with the different levels of government.”

In other words, don’t get your hopes up.