“There are big opportunities in the big cities” 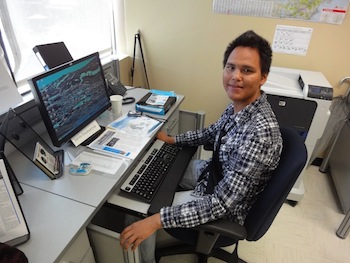 Jarvis Usuituaryuk of Salluit, who has lived in Montreal for seven years, hopes the Ivirtivik training program will prepare him for a job as an office worker. (PHOTO BY JANE GEORGE) 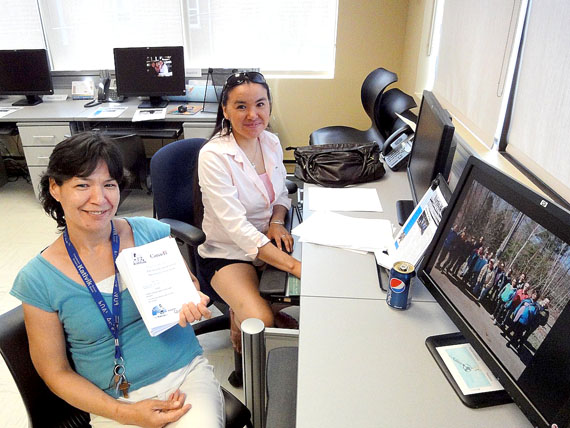 Sam Manning, who left Cape Dorset two years ago, and Kitty Partridge, who left Kuujjuaq 20 years ago, are two of the 14 Inuit now honing their job skills at the Ivirtivik Centre in Verdun. (PHOTO BY JANE GEORGE) 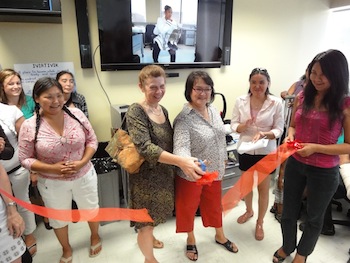 It’s open! Solange Loiselle of the Kativik Regional Government and Annie Grenier of the Kativik School Board cut the red ribbon on June 22 to officially open the Ivirtivik Centre, a training centre for Inuit in Montreal. (PHOTO BY JANE GEORGE)

MONTREAL — When representatives from the Kativik Regional Government and the Kativik School Board cut through a red ribbon to officially open the Ivirtivik training centre for Montreal Inuit on June 22, applause from its students, school commissioners, KRG officials and invited visitors filled the room.

The Ivirtivik centre, located on the second floor of a modest brick building at 4590 Verdun Street, in the heart of the Verdun borough, is a big step towards providing services for the estimated 800 to 1,000 Inuit who call Montreal home.

Services specifically designed for Inuit in Montreal have lacked for a long time, said Annie Pisuktie of Iqaluit, who has lived and worked in the city for nearly 30 years.

The Ivirtivik centre — whose name means “a place to be whole in mind, body and spirit”— will help students succeed in life, said Pisuktie, whose daughter, Leetia Kelly, is both a student and student assistant at the centre.

“I think it’s the education and the language that keep urban Inuit back,” said Kelly, whose math, reading and comprehension skills benefited greatly from her years spent in Montreal area schools.

The Ivirtivik centre, a one-year pilot project under the KRG, Service Canada and Emploi-Québec, is geared for any Inuit who live in Montreal, no matter which region of Inuit Nunaat they originally came from.

The students, who come from Nunavik, Nunavut and Labrador, started April 19 at the centre to build on the skills, knowledge and attitudes they’ll need to find jobs in and around Montreal.

To improve skills in reading, math, writing, computer use, communication, and co-operation, the centre provides a simulated work environment.

That’s why Ivirtivik’s premises look just like a real-live office — with a reception area and two computer-filled rooms.

In the morning students attend class, but in the afternoon they work on work-related projects — just like they would in an actual job.

“There are big opportunities in the big cities,” Saimata “Sam” Manning of Cape Dorset told the crowd at the opening ceremony. “But we need help to succeed.”

The two are quick to list what they hope to learn at Ivirtivik.

Trilingual Usuituaryuk wants to work as an administrator in an office, so he’s improving his French and computer skills and has taken on such jobs as designing the program for the June 22 opening.

Pirlutuut wants to work as a receptionist — a task she already practices at the centre.

“It’s a good opportunity for us to do things, and it’s going to help me to get job skills,” said the mother of two.

All Ivirtivik students are already armed with business cards of their own design — which are sure to open doors for them when they head out on the job market, said Joseph Annahatak, the vice-chairman of the KRG, at the opening.

“You should be very proud to be part of Ivirtivik,” he said.

Ivirtivik student Kitty Partridge of Kuujjuaq, who has lived in Montreal for 20 years, wants to upgrade her accounting skills and get back to work.

For Partridge, the course is a lifesaver: recently widowed and the mother of a young child, she goes to Ivirtivik every day as much for support and companionship of her fellow students as for the upgrading she wants.

“It’s like we all forget people who live in the city,” Partridge said about Inuit living in Montreal.

Tina Nochasak of Rigolet, Labrador is a relative newcomer to Montreal, having lived in the city for three years.

An Inuttut teacher in Labrador for 15 years, Nochasak now wants to earn her high school diploma and learn French.

The students say they’re not likely to return home, because of the lack of housing and the serious social problems of the North.

Operating on a budget of about $2 million — which also includes the operation of the Inuit employment office at 1050 Galt Street in Verdun, Ivirtivik has five staff members.

Students enrolled at the centre receive a minimum of $30 a day as a training allowance, or $45 a week if they’re on social assistance.

But more than money, the program is about giving participants the tools they need to find and keep a job, said Richard Desrosiers, a Montreal-based project officer with the KRG’s employment and training department.

At the opening, KSB president Alacie Naluturuk praised Ivirtivik as a “practical” idea for Inuit in Montreal.

The KSB, which delivers the training programs at Ivirtivik, also sees a great potential in Ivirtivik as a model for the North, said Judith Côté, the director of adult and vocational education for the school board.

Also at the June 22 opening was Paul Beaupré, a Verdun borough councillor, who sampled Arctic char with gusto.

Beaupré said he was surprised to learn that about 20 per cent of Montreal Inuit live in Verdun.

Beaupré told Nunatsiaq News that he now realizes he’s passed many Inuit on the streets of his borough without realizing where they come from.

The Ivirtivik centre has helped open his eyes to challenges of city living for Inuit from Canada’s North, he said.

“They’re like immigrants in their own country,” said Beaupré, who added that he can’t understand the resistance of Montreal’s Villeray borough to the prospect of new Inuit neighbours.