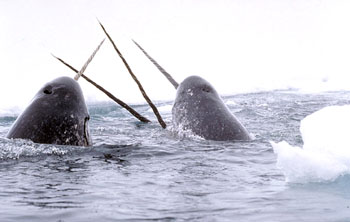 Cathy Towtongie, the president of Nunavut Tunngavik Inc., says the Department of Fisheries and Oceans does not have the right to impose export bans on narwhal tusks without consulting Inuit first. (FILE PHOTO)

Nunavut Tunngavik Inc. will challenge in federal court a decision by Fisheries and Oceans Canada to ban the export of tusks and other narwhal products from 17 Nunavut communities.

“DFO does not have the right to make such a decision without consulting Inuit and respecting the process established in the NLCA,” Towtongie said in a release.

“In NTI’s view, DFO has based their decision on questionable data. DFO’s research shows the population is thriving, and harvest numbers do not threaten the species.”

In its court application, NTI argues that DFO ignored the authority of the Nunavut Wildlife Management Board to regulate hunting in the territory.

NTI also argues that DFO acted unfairly by not consulting Inuit groups before issuing the decision and “deprived Inuit of the opportunity to respond and make submissions on a matter that directly affected their interests,” the application states.

But DFO maintains some narwhal populations are at risk and the ban is needed to comply with the terms of the Convention on International Trade in Endangered Species.

“The result would be even worse if we skirted the rules,” he said.

Speaking to reporters in Iqaluit Jan. 14, Nunavut MP Leona Aglukkaq said she try to help broker a resolution to the dispute before the matter went to court.

Aglukkaq said she sympathized with frustrated Nunavut hunters who face mounting international pressure against hunting the Arctic animals that are also staple Inuit foods, like narwhals, seals and polar bears.

“They [hunters] say that they’re tired of it. I’m tired of it too,” she said.