“I still believe that we negotiated a good agreement” 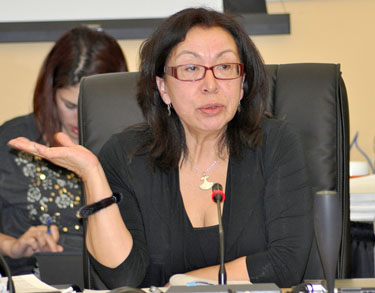 Nunavik negotiator Minnie Grey says the region “has missed a great opportunity,” in response to the rejection of the Nunavik Regional Government April 27. (PHOTO BY SARAH ROGERS)

KUUJJUAQ — Minnie Grey, one of Nunavik’s negotiators for the Nunavik Regional Government’s final agreement, says she is “disappointed” by the agreement’s rejection but that she “accept[s] Nunavik’s vote.”

Two-thirds of Nunavimmiut voted against the adoption of the new governance model in a region-wide referendum April 27.

Grey said that she, alongside co-negotiator Harry Tulugak, worked for many years to fulfill their mandate.

“I still believe that we negotiated a good agreement, which was a first step to building a foundation for governance,” Grey told Nunatsiaq News in an email. “We shall see where we go from here, but I am still of the opinion that Nunavik has missed a great opportunity to move forward.”

Many voters were concerned that the agreement lacked protection of the Inuktitut language and Inuit culture, Grey said; both are issues she recognizes as important but, Grey added, that “they are not addressed in the JBNQA [James Bay and Northern Quebec Agreement].”

“We negotiated on the basis of existing powers gained through the JBNQA,” she said, “and as is common in negotiations, we agreed with Quebec and Canada that new powers be negotiated in the next step.”

Phase two of the NRG’s agreement could have provided for new regional powers.

Although the agreement did not identify what those could be, “it is clearly stated that NRG along with Makivik [Corp.] would negotiate supplementary agreements to provide new powers,” Grey said.

“Using our existing public institutions that have proven themselves over the last 35 years would have allowed us to not have to start from scratch and we would have seen the creation of a Nunavik Assembly with decision-making powers,” she said.

Results showed that 66 per cent of ballots cast said “no” to the question “Do you approve the final agreement on the creation of the Nunavik Regional Government?”

Fifty-four per cent of the 7,881 registered voters cast a ballot in the referendum; roughly 250 of those votes were from Nunavimmiut living outside the region.

Official results are expected by early next week, said a spokesperson for the director of Quebec elections, the provincial body that oversaw the referendum.