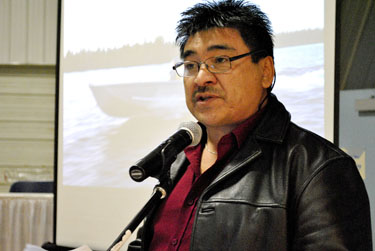 Fred Thorassie, a former chief of the Black Lake Dene band in northern Saskatchewan, said uranium mining has brought many benefits to his region and has inflicted little damage on the environment. (PHOTO BY JIM BELL) 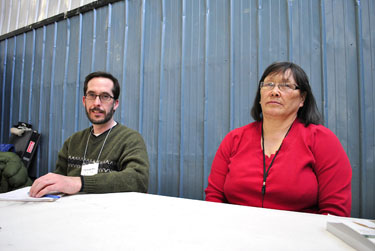 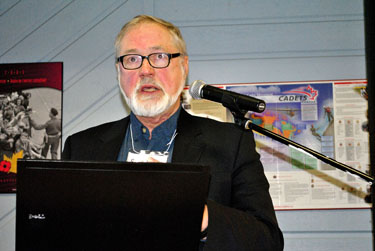 Grant Feasby, a consultant who works with the Nunavut and NWT Chamber of Mines, said he supports “safe and responsible” uranium mining. (PHOTO BY JIM BELL) 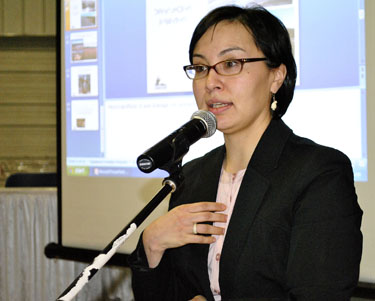 Sandra Inutiq of Nunavummiut Makitagunarningit said the Nunavut regulatory system is failing to protect Inuit. Her organization now calls for a plebiscite among Inuit beneficiaries on uranium mining. (PHOTO BY JIM BELL)

A public forum held March 17 at the Iqaluit cadet hall did little to create consensus on uranium mining in Nunavut and exposed deep divisions on the issue among Nunavut residents.

“Inuit organizations have failed us,” said Sandra Inutiq of Nunavummiut Makitagunarningingit, a Nunavut-based anti-uranium group, referring to NTI’s support for uranium mining and the perceived weakness of Nunavut’s land claim based regulatory system.

The Government of Nunavut organized the event to help form the uranium policy that Premier Eva Aariak promised to develop this past August.

A panel composed mostly of mining industry spokesman, regulators and a Nunavut Tunngavik employee said little to reassure the fears of those Nunavut residents who have already decided for themselves that uranium mining is bad for Nunavut.

Inutiq, for example, said in a presentation that the “driving force” behind the Nunavut land claims agreement is that Inuit would “control our lands on our terms.”

And Inutiq said uranium mining proponents are taking advantage of Inuit poverty and the “political oppression” associated with poverty by promising economic prosperity at the expense of the environment.

In a press release, copies of which the group placed on every chair in the building, the group called on NTI to hold a plebiscite among beneficiaries to decide if the organization supports uranium mining.

But Keith Morrison, NTI’s senior advisor on lands and resources, said NTI is not a “pro-uranium” organization and that only those who hold hardline anti-uranium views could possibly take that position.

Morrison said NTI’s mining policy states the organization will support mining projects only if benefits to Inuit are maximized and environmental damage is minimized.

“It means that in some cases we support it and in other cases we oppose it… Every situation is going to be unique,” Morrison said.

He also said it’s important for NTI that nearby communities and the regional Inuit association support a project before NTI will also support it.

And he defended NTI’s acquisition of shares in two small uranium exploration firms.

One of those firms, the Kivalliq Energy Corp., formed out of a 2008 Inuit-owned lands deal between NTI and the Kaminak Gold Corp. is now exploring for uranium at the Lac Cinquante deposit in the Kivalliq region.

Morrison said NTI did not “buy” shares in the company, but accepted them “for free” as part of a package deal.

As of now, the shares aren’t worth much, trading for only 43 cents each as of March 17.

Those conditions include guarantees that Nunavut uranium be used for peaceful purposes only and that Inuit gain the maximum benefit from such mining projects.

Joan Scottie, a Baker Lake resident associated with Nunavummiut Makitagunarningingit, said in an interview with Nunatsiaq News that she’s worried about the prospect of more than one uranium mine the region.

Right now, Areva is proposing a big uranium operation at its Kiggavik site, a project that would combine underground and open-pit mining.

“We have a lot of concerns. I know there is a lot of uranium around Baker Lake. If Kiggavik is approved, how many more mines are we looking at down the road in the next few years?” Scottie said.

Scottie said she fears that if Kiggavik were to be approved, the community would lose control over the pace of development.

And she said that due to the extent of mineral exploration, caribou have moved away from Baker Lake and hunters can’t find any.

“We have cancelled all our monthly feasts because there are no caribou,” Scottie said.

Fred Thorassie, a former chief of the Black Lake Dene band in northern Saskatchewan, said, however, that in his region, uranium mining has not damaged caribou herds or the environment.

Thorassie, who appeared as a representative of the NWT and Nunavut Chamber of Mines, said he worked in uranium mines for more than 30 years and he praised the industry for what it has done for aboriginal people in his region.

“It is highly regulated. We have careful monitoring of the environment,” Thorassie said.

And he said aboriginal people, especially young people who need jobs, should work with the mining industry to better their lives.

“We can do better. We can be part of these developments,” Thorassie said.

Ramsey Hart of Mining Watch Canada, a non-governmental lobby group that keeps a sceptical eye on the mining industry, responded by saying waterways in the Athabasca region of Saskatchewan have indeed been polluted with radioactive materials.

Kevin Scissons of the Canadian Nuclear Safety Commission said, however, that regulation and enforcement have eliminated most of he dangers assocated with uranium mining.

“Today’s uranium mines are at levels of safety similar to other mines in Canada,” Scissions said.

Scisson’s agency, the CNSC, will play a major role in licencing, inspecting and enforcing regulations on any uranium mine developed in Nunavut.

Between 70 and 80 people, many of them observers from various government agencies and Inuit organizations, along with municipal representatives from around the Baffin region, attended the event. Open house sessions held earlier that day and on March 16 drew thin crowds and most regular Iqaluit residents gave the events a pass.

The GN will hold two more public forums: in Baker Lake March 30 and March 31, and in Cambridge Bay April 12 and April 13.

They will receive written and oral submissions from the public until May 15. 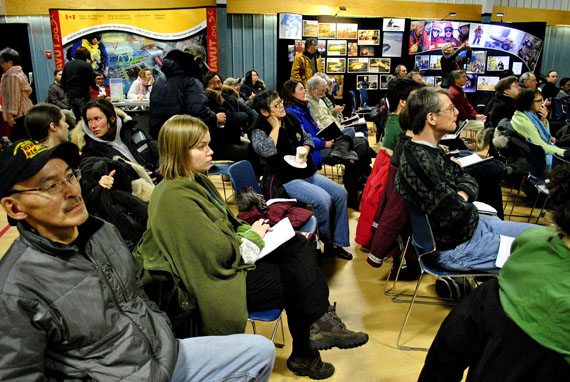 Between 70 and 80 people, many of them observers from various government departments and Inuit organizations, along with municipal representatives from around the Baffin region, sat in Iqaluit’s cadet hall March 17 to hear a GN-sponsored forum on uranium mining. (PHOTO BY JIM BELL)