“We think there’s greater opportunities in some of the communities.” 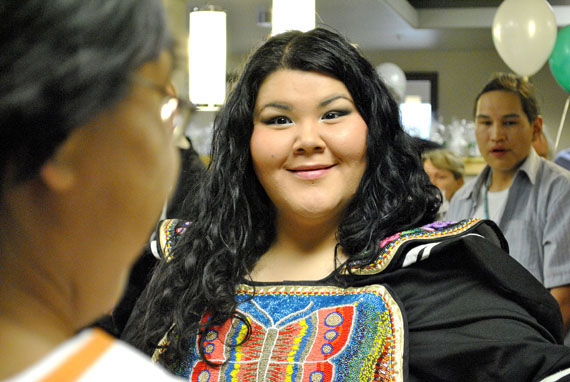 Throat-singer Becky Kilabuk facing the man who taught her how to throat sing, Elisa Kilabuk, as they prepare to perform at the opening of the new First Nations Bank of Canada branch in Iqaluit. (PHOTO BY JIM BELL) 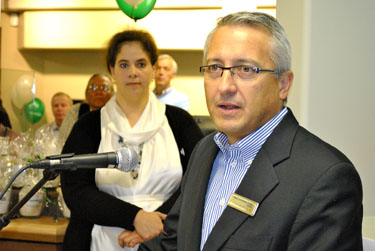 Keith Martell, the chair and CEO of the First Nations Bank of Canada, speaks at the June 24 official opening of the bank’s Iqaluit branch, saying the company plans to open two more branches in Nunavut within five years. (PHOTO BY JIM BELL) 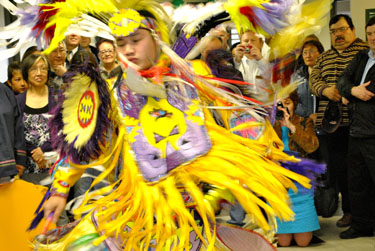 Part of an all–aboriginal entertainment program, a plains Cree fancy dancers delights a large group of Iqaluit residents who attended the June 24 opening of the First Nations Bank branch at the Kamotiq Centre. (PHOTO BY JIM BELL)

“We didn’t come here just to be in the Iqaluit market,” First Nations Bank chair and CEO Keith Martell said in a Nunatsiaq News interview.

The First Nations Bank’s Iqaluit branch formally opened at the new Kamotiq Centre in a ceremony that included a barbeque and throat-singing, drumming and dancing.

Billing itself as experienced in aboriginal communities and economies, the First Nations Bank promises to be flexible in dealing with the unique conditions in Nunavut.

For example, “Our ads don’t assume that a first-time home buyer is only 25,” said Martell.

With Nunavut’s mixed economy of traditional subsistence activities and modern businesses, Martell said the bank understands that many customers are seasonally employed.

That means the bank expects some of its customers to be in arrears on loans for months until their earning season starts.

Another local factor to consider is the annual timing of sealift.

“We know the extreme importance of getting an approval of a credit for a building that’s going to be done for a year,” Martell said. “We understand that there’s a different timeline, a different reality.”

Because aboriginal economies like Nunavut’s are in the early stages of development, Martell said he anticipates Iqaluit’s branch will do a lot of early-stage financing of start-up businesses, the sort of thing usually handled by development corporations.

Getting into Nunavut early means the bank might get in on the development of Nunavut’s infrastructure and resource extraction industries, Martell explained.

The bank’s literature will also be available in Inuktitut syllabics and Inuinnaqtun as soon as Canada Post delivers it.

Atuqtuarvik Corporation — founded by Nunavut Tunngavik and the Nunavut Trust — owns about 18 per cent of the First Nations Bank’s shares, making it the third-largest investor after the Toronto-Dominion Bank and the Saskatchewan Indian Equity Foundation.

Give all that, Martell said he hopes governments and land claims organizations will bring their business to First Nations Bank.

“Aboriginal organizations understand they own us,” he said. “And banking with us is getting a payback on our organization.”