Quebecers petition for railroad to Nunavik 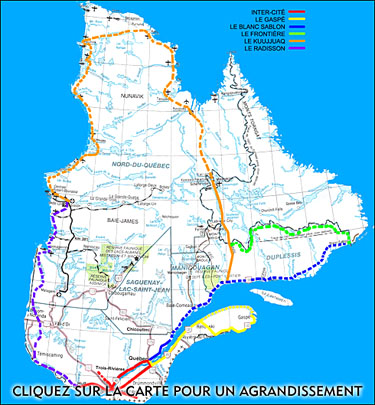 There’s support for a new Trans-Quebec railway system which would include Nunavik in its 10,000 kilometre route. (MAP HARVESTED FROM TRANSQUEBECEXPRESS.CA)

Nearly 4,000 Quebeckers have signed a petition that calls for a cross-Quebec railroad that would link Nunavik to southern Quebec.

The Quebec government and its major financial institutions should support the construction of a “Trans-Québec Express” railway, which would cross Quebec from the Gaspé to Nunavik, says the petition, to be tabled April 29 at the Quebec’s national assembly by MLA Denis Trottier.

The 10,000-kilometre route would take a week to travel and wind around the entire coastline of Nunavik, from Kuujjuaq to Kuujjuaraapik.

“The Kuujjuaq” would include stops at the Pingualuit park in Kangiqsujuaq and other communities on the Ungava and Hudson Bay coasts.

The railway’s inspiration comes from the famed Trans-Siberian railway that runs across Russia, from Moscow across Siberia to the Far East— but Quebec’s Trans-Québec Express” would actually be longer than Russia’s Trans-Siberian route, notes the French-language website of the “Fondation TransQuébec Express” at http://www.transquebecexpress.ca.

Jobs, new economic possibilities— such as greenhouses in Nunavik— and more communication between the various regions of Quebec would result from the Trans-Québec Express,” says Michelle L. Déry, the foundation’s president, who has lobbied for this project since 2004.

“Let’s give this mission to our train: the protection and promotion of culture, the creation of regional universities, and the opening of regions, ignored for so long, which have many magnificent sites and a wealth of human, natural and material resources.”

The train would also cut down on the production of greenhouse gasses, she notes.

“The possibilities are limitless,” Déry says on the website. “We just have to act on them.”

Consultants are already looking at the feasibility of railway between Kuujjuaq and Schefferville as well as a road connection, which would likely to be more expensive of the two possibilities.