This year, it’s Nanook of the really far North

Canadian Forces exercise to be held in High Arctic 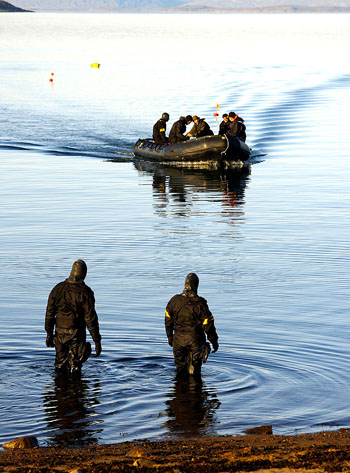 Navy divers wait for Canadian Forces personnel to come ashore during an Operation Nanook exercise at Apex Beach in Iqaluit in August, 2009. This year’s edition of the military exercise, August 6—29, moves to North Baffin and the High Arctic for the first time. (PHOTO BY CHRIS WINDEYER

Soldiers from all three branches of the Canadian Forces, plus Canadian Rangers, Coast Guard and other government personnel will descend on Pond Inlet, Resolute Bay and Grise Fiord for a series of exercises from Aug. 6 – Aug. 29.

Nanook was held in the south Baffin for each of the last three years, but Lt.-Cmdr. Albert Wong of Canada Command in Ottawa said the forces are trying to extend their range in the Arctic.

“By moving up higher into the High Arctic it provides a greater degree of complexity,” Wong said.

An information sheet prepared by the military and tabled in Nunavut’s Legislative Assembly says Operation Nanook will also help local and territorial officials respond to emergencies and help Canadian Rangers develop their skills.

But he added he hopes any debriefing the military does after the exercise notes the High Arctic’s need for infrastructure.

“If we’re going to be having traffic going in and out of the (Northwest) Passage, there’s no infrastructure for ports, for docking ships,” Elliott said, noting ships will have to sail to Nanisivik to refuel.

She said the exercise consists of planning responses to oil spills and practicing the deployment of booms used to contain spills.

Elliott said communities in his riding are more comfortable hosting Nanook knowing that no oil will be going into the waters of Lancaster Sound.

The operation will also feature participation by ships from the Danish and American navies, plus a ship and dive team from the United States Coast Guard.

That too is a new twist to Operation Nanook, and notable for a Canadian sovereignty exercise, since Canada has lingering offshore boundary disputes with both Denmark and the U.S.

“They’re our allies,” Wong said. “Collaboration is part of what Canada does.”