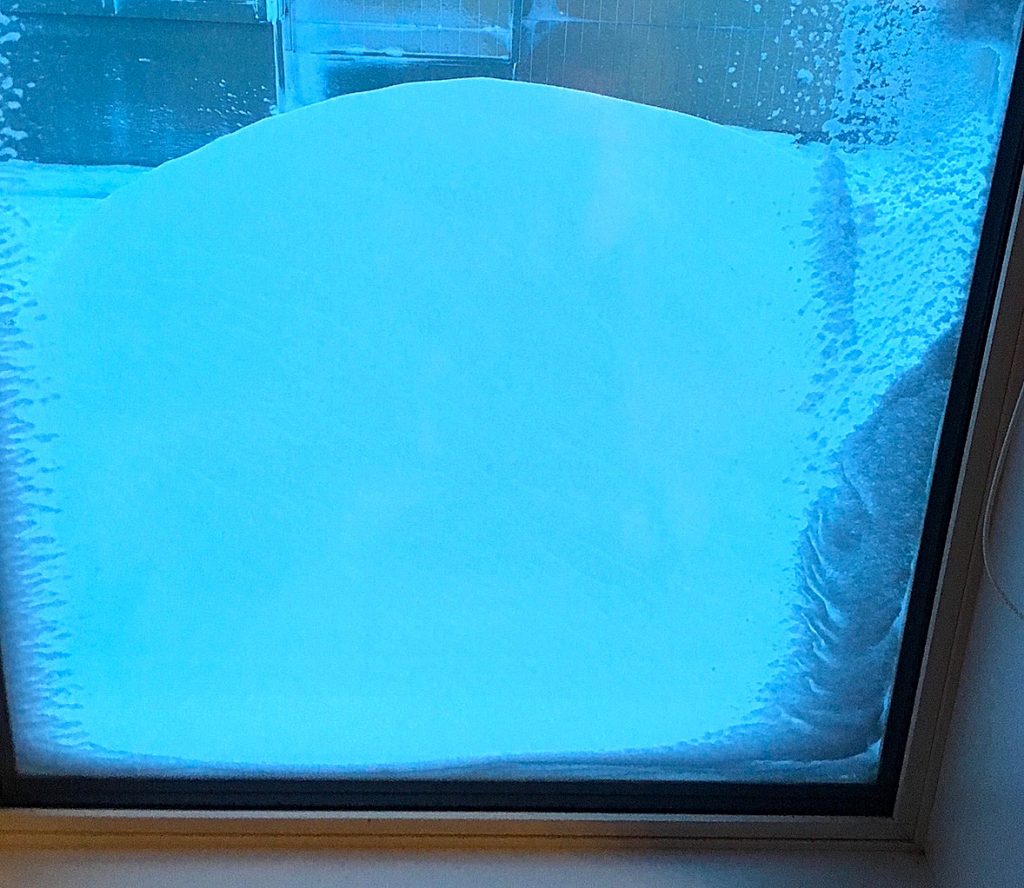 A snow drift covers the window of a local residence following following this past week’s three-day blizzard in Cambridge Bay. (PHOTO COURTESY OF MARG EPP)

Residents of the western Nunavut community of Cambridge Bay won’t be dreaming of a white Christmas any time soon. Snow blocks the front entrance to Kullik Ilihakvik elementary school in Cambridge Bay on Dec. 13. Due to the blizzard, students started their break from school three days early and won’t return until Jan. 3. (PHOTO BY KINGAHANA LYALL/FACEBOOK)

A three-day blizzard that started Dec. 12 this past week brought them more snow for the holidays than many can remember.

Blowing snow, powerful gusts and wind chills dipping into the minus 40s kept nearly everyone at home, and the town of about 1,800 people shut down.

Students and many office workers got an extra three days of Christmas holiday time as the storm blew huge drifts against houses and across roads.

Municipal services, such as water delivery and sewage pickup, ground to a halt, and the RCMP warned people to stay home. All flights in and out of the community were cancelled.

The many pre-Christmas activities that had been planned, including a bazaar, meals, parties and even the opening of the annual Christmas games, were cancelled or postponed.

Some took videos of the scene outside. But visibility was poor and you couldn’t see much as winds gusted up to 90 kilometres per hour in the dim, blueish twilight of a December day.

Inside their homes, people tried to keep busy: Bob Aknavigak said he melted snow to do the dishes. This is how you get water from snow when you need it, by melting it on the stove, as Aopak Angulalik did, even after the blizzard had died down on Saturday, and water delivery trucks hadn’t yet made it to every home. (PHOTO BY AOPAK ANGULALIK/FACEBOOK)

“The worst part, just looking at the grimy dishes on the counter and all the other things that go with having no water,” said one of many Cambridge Bay residents who shared their stories about blizzard life with Nunatsiaq News.

Aopak Angulalik said she watched movies, sewed, made meals at any time of the day, took naps and had cuddles with her grandson after wrapping presents.

She said she wondered what to do next: “Naps, melt snow to do dishes, enjoy the weather, then complain a little.… Mother Nature always wins, ” she said.

And Helen Koaha said she was happy to stay home with her grandson.

But, by Friday, day three of the blizzard, Vicki Aitaok said she just wanted water to flush the toilet and wash her hair.

About her enforced stay-at-home period, she said:

“I heard from a loved one in heaven, found out I am going to win the lottery in 2019, discovered five truths about myself, discovered what I learned in 2018, learned I am on Santa’s naughty list (but he will bring me something anyway), learned my guardian angel is still guarding me, found out what kind of mother I am … the discoveries just go on and on.”

To lighten the mood, Aitaok listened to Bing Crosby’s Hawaiian Christmas song, Mele Kalikimaka, “from the land where palm trees sway … here we know that Christmas will be green and bright.” When Marg Epp of Cambridge Bay opened her door on Friday, Dec. 14, this is what she faced after three blizzardy days. (PHOTO COURTESY OF MARG EPP)

Marg Epp was luckier: she started the blizzard with a full tank of water.

And to make the most of the holiday atmosphere, she lit Christmas candles and lights, put apple cider on to simmer, and caught up on her sewing and baking.

For Eva Kakolak the storm brought back memories of the past, including memories of “my birthday 68 years ago.”

That’s when she was wrapped up in caribou skin and brought to the next door igloo dwelling to be adopted, she said.

“My happy beautiful storm days there, no wonder I love them,” Kakolak said.

As the winds died down Friday afternoon, the municipality of Cambridge Bay sent out its heavy equipment fleet to remove snow on emergency routes.

The stores reopened, and kids started offering snow shoveling services. Many ventured out to take photos of the drifts by around town.

3 day snow storm. My son close to the rooftop of the High School. pic.twitter.com/jjJTLUcEmQ

On Saturday, water and sewage trucks slowly went back on the roads that had been cleared. Those who lacked water were able to go to the Kiilinik High School, which is connected to the water system, to take a shower or fetch water. Several families went ahead with their Christmas parties. Heavy equipment operators clean away the snow at the airport in Cambridge Bay on Dec. 15. That’s a big job, as you can see from this photo by Ronald Qamukaq, who asked people to steer clear of the municipality’s effort to clean up after last week’s three-day blizzard. (PHOTO BY RONALD QAMUKAQ/FACEBOOK)

The municipality’s heavy equipment operators headed up to the airport to clear away the many metres of drifted snow around the terminal and runway so that a cargo flight could bring in supplies and a person in need of a medical evacuation could leave Cambridge Bay.

“Thank you to the water and sewage workers for bringing peace of mind so quickly after the blizzard,” said Korinne McDonald on Cambridge Bay’s news page on Facebook.” “Thank you to the snow removers who have worked day and night, so we all don’t go stir crazy; thank you to the stores who remained open and who will now have to work overtime to accommodate the ’late freight,’ and thank you to the Hamlet for making the town so pretty this Christmas. If I’ve forgotten anyone, thank you too! Happy Holidays to a town that seems more full of good spirit than ever.”

The pre-Christmas blizzard was preceded by another unusual event in Cambridge Bay: a record-breaking high of -7 C on Dec. 10, which broke the previous record of -8.6 C, set on that day in 1987.

It’s not clear if the amount of snowfall was also a record-breaker, but the current depth appears to be a lot more than the 37 cm on the ground recorded in 1992.

“This is the greatest daily snowfall on record for any December day, beating the previous record from 1994,” he said.

Research presented at this past week’s ArcticNet science conference in Ottawa suggested climate change is also likely to bring more precipitation to the Arctic.