A rocky start to the Fifth Thule Expedition 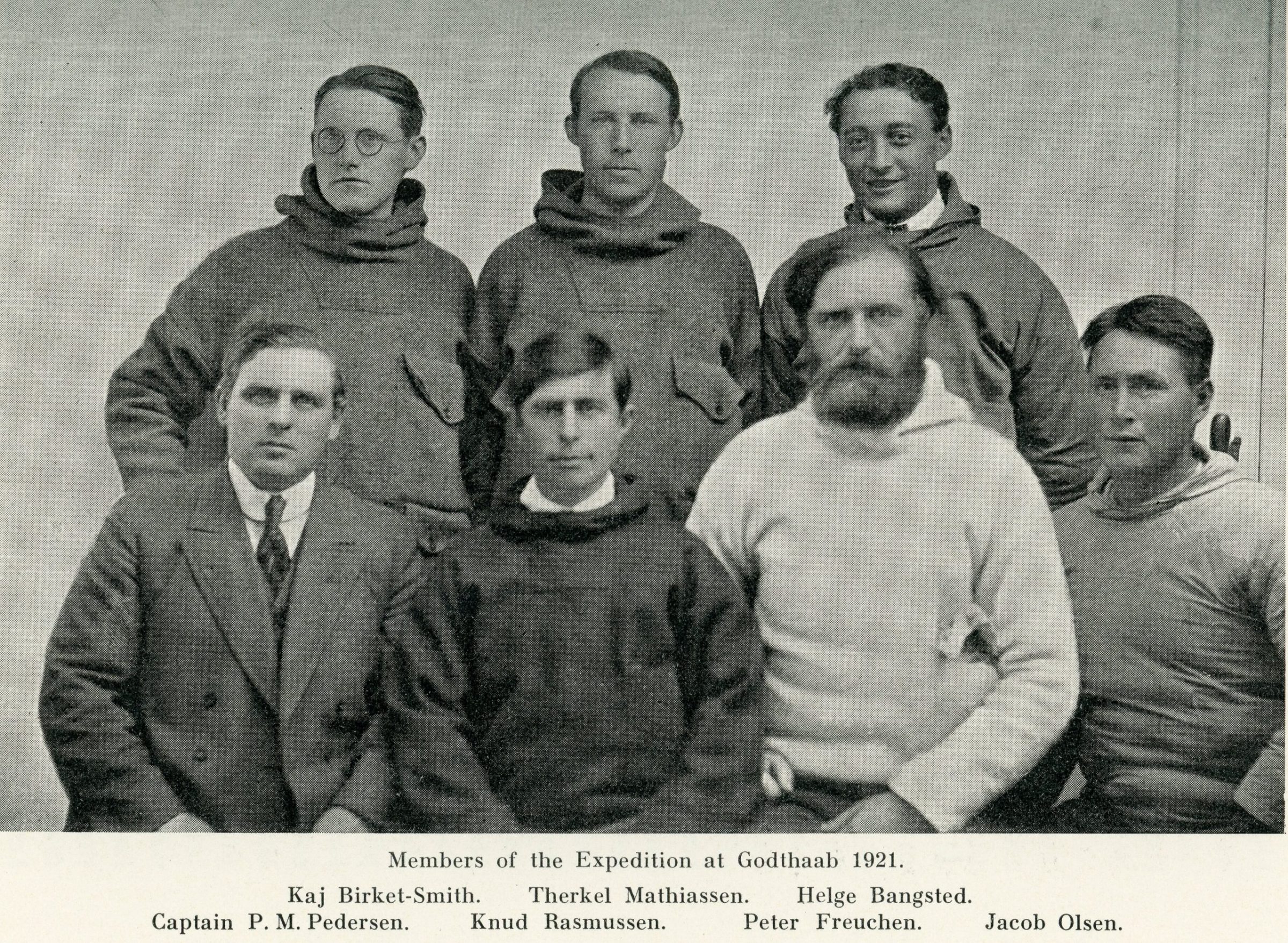 Participants of the Fifth Thule Expedition are seen in Nuuk in 1921. Kaj Birket-Smith was an ethnologist. Therkel Mathiassen was the expedition’s archaeologist. Helge Bangsted was a scientific assistant. Captain Peder Pedersen was the master of the expedition’s ship. Knud Rasmussen was folklorist and expedition leader. Peter Freuchen was cartographer and naturalist. Jacob Olsen was interpreter, dog-driver and hunter. The Inughuit participants were all in hospital when this picture was taken. (Photo from the Report of the Fifth Thule Expedition 1921-24, Vol. 1.)

The Greenland administration had chartered the ship, at that time the largest vessel ever to go to Greenland, to take dignitaries to Nuuk to celebrate the bicentenary of the first missionary’s arrival in Greenland and to carry supplies. Most of the Fifth Thule expeditions materials were aboard that ship, including their winter house, guns, ammunition, and photographic material.

Captain Peder Pedersen had left earlier with the Thule trading station’s small ship, Søkongen (Sea King), for Thule to pick up Inughuit to work for the expedition. Helge Bangsted, a Dane, had wintered in Greenland. Peter Freuchen was already there with a film expedition – he would arrive in Nuuk at the end of June.

The Bele arrived in Nuuk on June 28 to await the festivities that would be held five days later. Having deposited its dignitaries there, it continued north with Mathiassen and Birket-Smith. But on July 14, the ship struck a rock near the island of Tukingassoq between Uummannaq (often spelled Umanak) and Upernavik. Its 42 passengers had to take refuge ashore and sleep under tarpaulins.

In the meantime, King Christian X, who coincidentally was to be the patron of Rasmussen’s expedition, had arrived in Nuuk aboard the S. S. Island. The Bele’s wireless operator sent an SOS message hoping it would be picked up by the king’s ship – these two ships carried the only wireless equipment in Greenland at the time.

Rasmussen and Freuchen, meanwhile, had left Nuuk on the Søkongen a day before the wreck of the Bele. Four days later at Ilulissat (then Jakobshavn), they learned of the accident. The Island had received the SOS from the Bele and steamed north, picked up the stranded passengers, and rendezvoused with the Søkongen.

Rasmussen feared that his expedition might be doomed because of the loss of critical supplies that had been in the hold of the Bele, especially the material for the expedition’s headquarters. Fortunately Jens Daugaard-Jensen, the director of the Greenland administration, was aboard the Island, as was the king. Daugaard-Jensen telegraphed to Denmark a list of the most urgent supplies that the expedition would need in order to go ahead, asking that they be mustered and sent out immediately to Nuuk on the next ship, the Hans Egede. Attempts were made to salvage items from the Bele, but little was usable. 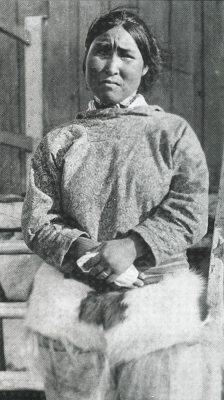 Navarana Freuchen is seen two years before her death. (Photo from the Arktisk Institut, Copenhagen)

The expedition then proceeded north on the Søkongen to Upernavik where Navarana’s condition suddenly worsened. She was taken to a house in the settlement to rest. “I did not leave her side,” wrote Freuchen, “and got our good friend Fat Sofie to help nurse her.”

When the Søkongen continued north to pick up the Inughuit, Freuchen remained in Upernavik with his wife. The following day, she died. “In the evening she asked me what I thought was the matter,” Freuchen recalled. “Her head was buzzing with thoughts which came unsummoned, she said. It was ghastly to sit helpless and watch her fade away. I told her to try to sleep but she could not. I went into the kitchen to brew tea for her… Navarana was so quiet that I tiptoed in to look at her. As I watched her, her lip just quivered. Then she was dead.”

Sofie and a friend made arrangements for a coffin. But then the Lutheran church had a surprise for Freuchen — because Navarana was not baptized, she could not be buried in the graveyard. Freuchen later described the local minister as “an undersized, native imbecile” who told him that “no bell might toll over her funeral and, he was sorry, he could not deliver a sermon.”

Seething with rage, Freuchen buried his wife himself. Freuchen was now a widower; his two children, Pipaluk and Meqqusaaq, were motherless.

The Søkongen returned from Thule with seven Inughuit who had agreed to leave home and accompany the expedition for three years. They were a man of about 35 years, Iggiannguaq, and his wife Arnarulunnguaq; Aaqqioq, about 30, and his wife Arnannguaq; Nasaitsorluarsuk, known as Poorsimaat or “The Bo’sun,” and his wife Aqattaq, about 16 years old; and a young bachelor named Qaavigarsuaq. Arnarulunnguaq’s brother, Aajaku, a man who had travelled with Rasmussen on an earlier expedition and also spent a few years in Denmark, was to have accompanied the expedition, but he had committed suicide earlier in the year.

One more person was needed. Rasmussen recruited an old friend, Jacob Olsen, minister at Ujarasugsuk, as interpreter, dog-driver and hunter.

The little vessel continued down the coast and reached Nuuk on August 24. But a vicious flu was ravaging Greenland that summer and all the Inughuit came down with it. They were all admitted to the hospital where six out of seven were diagnosed with pneumonia. On Sept. 6 tragedy continued with the death of Iggiannguaq. The expedition had not even left Greenland and already three Inughuit were dead. A day after Iggiannguaq’s death, all the Inughuit were baptized; that evening the expedition left for Canada.

In mid-September the Søkongen made land at a small island near Naujaat (then Repulse Bay). Rasmussen called the place Danish Island. This would be the expedition’s headquarters for the next three years. The Fifth Thule Expedition had begun.