A tapestry made of dreams 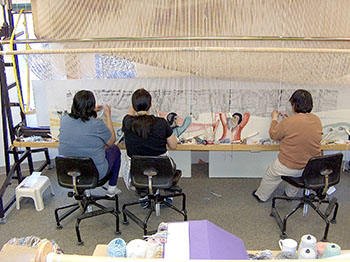 Pangnirtung weavers Oolassie Akulukjuk, Kawtysie Kakee and Anna Etuangat work on the huge tapestry commissioned from the Uqqurmiut weaving studio by Inuit Tapiriit Kanatami and the Vancouver Organizing Committee for the 2010 Olympic and Paralympic Winter Games. (PHOTO COURTESY OF THE UQQURMIUT CENTRE FOR ARTS AND CRAFTS) 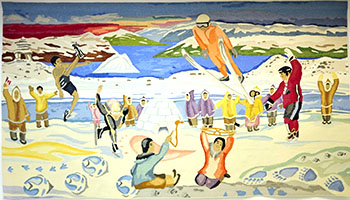 This tapestry, called “Achieving a dream,” will greet visitors to the Richmond Oval, a venue for speed skating competitions at the 2010 Vancouver Olympics and Paralympics. (See story posted below.) (PHOTO BY DAVID KILABUK)

Canada’s North will be in the spotlight when international athletes compete at speed skating events at the 2010 Vancouver Olympic and Paralympic winter games next February.

At the Richmond Oval speed skating venue, they’ll be greeted by a huge rainbow-coloured tapestry, called “Achieving a dream,” which features an igloo, a speed skater, a high-kicker, an inuksuk, a ski jumper and Inuit playing string games.

The six-by-10-foot tapestry is the work of weavers from the tapestry studio at the Uqqurmiut centre for arts crafts in Pangnirtung.

To design and weave the tapestry, the studio received a $100,000 commission from the Vancouver Organizing Committee for the 2010 Olympic and Paralympic Winter Games via Inuit Tapiriit Kanatami.

The tapestry’s design, showing a fiord surrounded by snow-covered hills and animal tracks, owes much to the creative talent of Pangnirtung graphic and print artist Andrew Qappik.

Producing the large tapestry took more than two months—and before the weavers could even start their work, lengthwise threads of the warp had to be carefully put into place.

Then, tapestry’s design was placed behind the loom and transferred to the threads with indelible markers.

Only after this could the weavers start to fill in the design, weaving in threads horizontally through the warp.

To meet their deadline for the tapestry’s completion, weavers Olassie Akulukjuk, Kawtysie Kakee, Anna Etoangat and Kathy Battye logged 2,030 hours at the loom, working during the day and into the evening, all summer long.

These new techniques included ways of weaving figures to make them appear to leap out from the background as well as time-saving finishing techniques.

After the ”cutting off ceremony,” when the completed “Achieving a dream” came off the loom — and received some last-minute touches, the tapestry was shipped off at the beginning of August to Vancouver by Canadian North.

The tapestry will be featured in a special book about art and the 2010 Vancouver Olympics, Fisher said.

Weaving started in Pangnirtung as a federally-funded, program in 1970. The Uqqurmiut centre for arts and crafts is now an Inuit-registered firm, supported by the Nunavut Development Corporation.

Its weavers, who produce distinctive Pang scarves, blankets, shawls and traditional woven belts, also create annual limited-edition tapestries with Inuit themes. Along with the Dovecot studio in Edinburgh, Scotland where Cochrane works, Pangnirtung’s tapestry studio is one of only a few places in the world where weavers interpret the work of contemporary artists.

The studio, which celebrates 40 years of weaving in 2010, is now looking for other tapestry commissions— perhaps one for Ottawa’s Parliament Hill, a possibility recently suggested to Prime Minister Stephen Harper when he visited the centre.