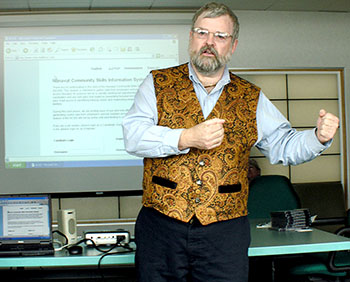 Bruce Rigby of Iqaluit, seen here in 2006 when he worked on the Nunavut Community Skills Information System database for the GN, will start work Sept. 1 as Premier Eva Aariak’s principal secretary. (FILE PHOTO)

“I am pleased to welcome Bruce to my office,” Aariak said in a news release Aug. 14. “He brings a broad range of experience that will serve our government well.”

Until earlier this year, Rigby served as president of the Qulliq Energy Corp. Before that, he was executive director of the Nunavut Research Institute and interim president of Nunavut Arctic College.

Since her election as premier in November 2008, Aariak has worked without a permanent principal secretary, the most powerful political position on the premier’s personal staff.

Robert Carson, a former deputy minister of intergovernmental affairs, has filled the job on an interim basis for the past five months. Carson will soon depart for the University of Edinburgh to work within the university’s Canadian Studies department.

Aariak also announced the appointment of Kathleen Lausman as deputy minister of the Department of Community and Government Services.

Lausman succeeds David Akeagok, who departed the deputy minister’s position this past May 15 to move to Arctic Bay, where he will continue to work for the Government of Nunavut.

Since then, Shawn Maley of Rankin Inlet has filled in as acting deputy minister.

Lausman most recently worked for the Government of Alberta as executive director of the property development branch of the Alberta government’s infrastructure department.

Lausman will start work for the GN Sept. 21.

Aariak also said that a competition for the president’s job at the Nunavut Housing Corp. is “proceeding well” and that she hopes to make an announcement on it this September.