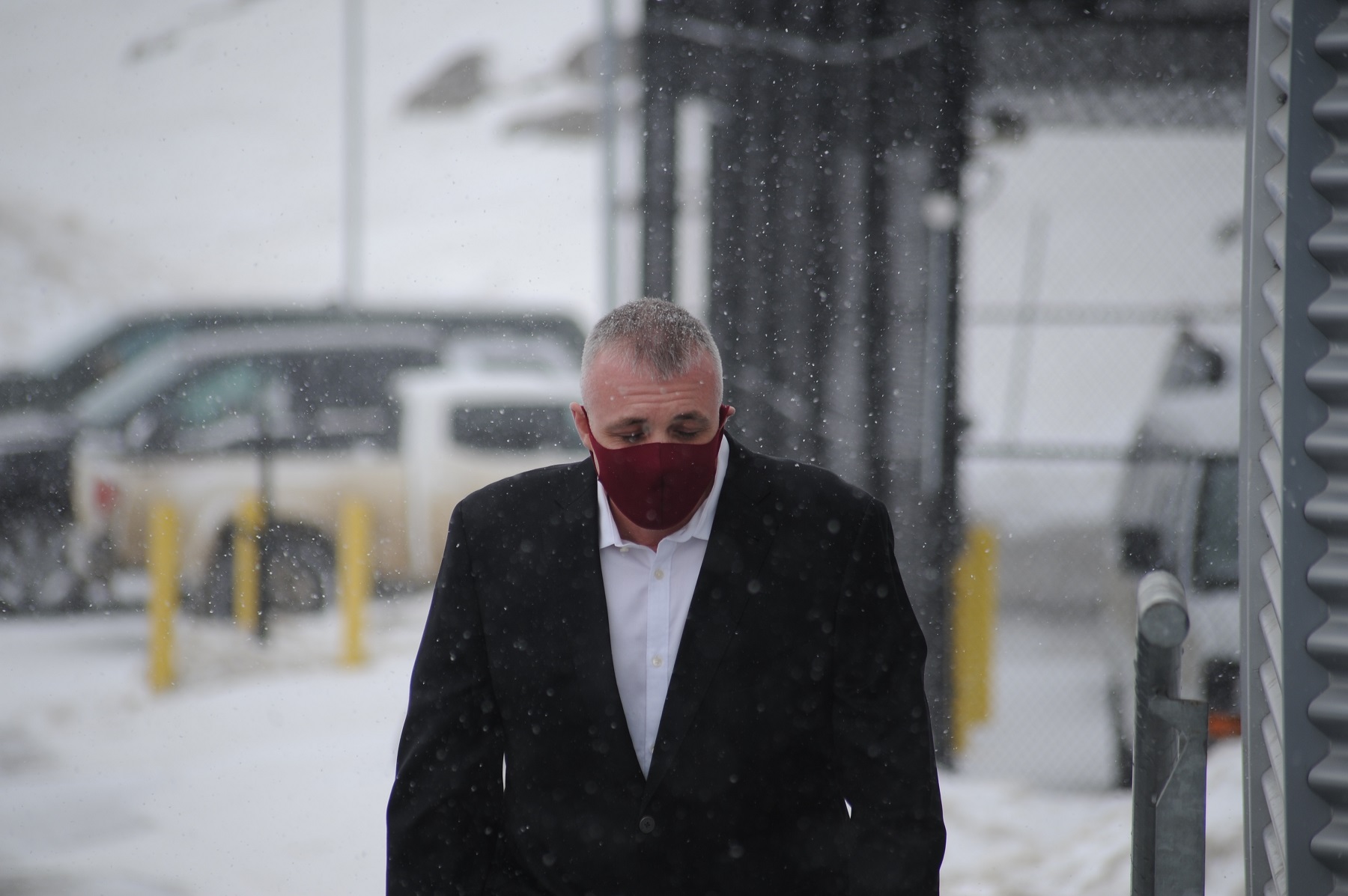 Daniel Hodgson, seen outside the Iqaluit courthouse last week, took the stand during his second-degree murder trial Tuesday, fielding questions about why he put Bradley Winsor into a chokehold. (Photo by David Venn)

Daniel Hodgson took the stand during his second-degree murder trial Tuesday, facing questions about why he put Bradley Winsor into a chokehold and what he expected would happen as a result.

Hodgson is charged with the second-degree murder of Winsor, stemming from an early morning party in Apex on May 19, 2017.

The 41-year-old, originally from Edmonton, has lived in Iqaluit since he was 16. Hodgson owns a dry-cleaning business and has three children, two of whom live in Iqaluit.

Hodgson testified on Tuesday that he put Winsor in a chokehold as a reaction to Winsor having harassed and threatened other guests at the party. Winsor fell unconscious and was later declared dead in Iqaluit hospital.

As he was examined by his own lawyers Tuesday morning, Hodgson described meeting Winsor for the first time at a birthday celebration in an Iqaluit bar on May 18, 2017, before the group moved on to a house party in Apex.

Hodgson, who testified that he had an injured left hand that night, said things were “pleasant at first,” though Winsor, a 300-pound man, kept squeezing his injured hand at the party and taunting him.

“I was the biggest person there and I think he was intimidated and trying to show he was big,” Hodgson testified.

Hodgson said he ignored it and went to sleep in a spare bedroom in the home, but he was later awakened by a commotion.

Hodgson said he awoke to Winsor threatening a woman in the other room, with his fists raised as though he would strike.

“He was about to swing at Mantra, is what I saw,” he testified. “I grabbed him by his shoulders and tried to throw him to the floor.”

But Winsor them elbowed him in the head, Hodgson said, so he retaliated by putting his right arm around the man’s neck. Hodgson said he had Winsor in a chokehold for about 10 seconds before both men fell to the floor.

When he noticed Winsor wasn’t moving, Hodgson said he “started panicking and asked someone to call an ambulance.”

When later asked by Crown lawyers why he felt inclined to attack Winsor, someone he’d only just met, Hodgson answered “I was afraid of him.” He said he intended to keep the hold until Winsor stopped struggling.

The Crown asked Hodgson if and where he’d learned to do a chokehold; he responded that he’d seen them done at an Iqaluit bar he worked at in the late 1990s. Hodgson said he had also seen police officers employ chokeholds in some news reporting he’d watched.

Hodgson said he’d put one other person in a chokehold in 2016, though the individual did not sustain any injury.

But Hodgson told the court he’d never been trained to fight or injure anyone. In 2017, he had a strict fitness routine and was taking a testosterone supplement to treat low levels of the hormone.

The Crown asked Hodgson if he considered how potentially deadly the chokehold could be. Hodgson responded: “I have since reconsidered a lot of things from that night.”

‘I was in a panicked state’

Hodgson appeared on the stand Tuesday in a blue button-up dress shirt and black jacket. He became agitated and defensive with some of the Crown’s cross-examination.

Hodgson told the court he left the party immediately after Winsor fell unconscious, only to return to a friend’s home nearby to watch what was happening through a window.

Around 7:30 that morning, Hodgson left the friend’s home and tried to return to the scene of the house party, but an RCMP officer guarding the home said no one was there.

Hodgson testified that he took a cab back into Iqaluit, stopping at the back of Qikiqtani General Hospital to see “what was going on.”

He then returned home to try and sleep, but was soon awoken by a friend who told him Winsor had died.

Hodgson said he then took $10,000 from his safe and went to the Iqaluit airport to buy a one-way ticket to Ottawa. He denied that he was trying to flee.

Hodgson was arrested before he made it to the airport’s security line.

The trial continues Wednesday afternoon from Iqaluit’s courthouse, where it’s being livestreamed to the public.