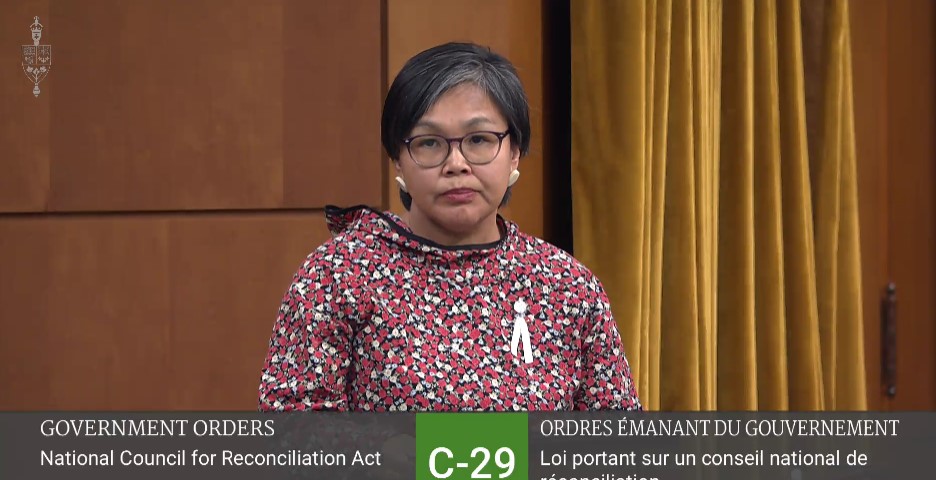 Acknowledging the existence of systemic racism is the biggest step that can be taken toward reconciliation, Nunavut MP Lori Idlout said in the House of Commons Tuesday. (Photo courtesy of ParlVu)

The biggest meaningful step toward reconciliation is to acknowledge that systemic racism exists in Canada, says Nunavut MP Lori Idlout.

“Continuing to deny the existence of systemic racism will not allow solutions to emerge,” Idlout said in the House of Commons Tuesday.

The New Democratic Party MP was speaking during a debate on Bill C-29, which would create a National Reconciliation Council.

Bloc Québécois MP Denis Trudel asked Idlout if she could make one recommendation “to take a meaningful step toward reconciliation,” what it would be.

“What would be her recommendation to emerge from this vicious cycle? We always talk over and over again about the same thing,” said Trudel, who added the Bloc Québécois supports the bill to create a National Reconciliation Council in principle.

Trudel called Idlout a “unique voice” in the House of Commons, particularly during discussions on reconciliation.

During the debate on the bill, which is at third reading in the Commons, Idlout gave a speech that touched on the different perceptions that Indigenous Peoples have of institutions like education, health care and the RCMP compared to the views held by non-Indigenous Canadians.

Speaking in support of the bill, Idlout said justice comes quickly for non-Indigenous Canadians, but “for Indigenous Peoples, it takes generations.”

And while violence is something most Canadians only see on their TV screens, for Indigenous Peoples “violence is surrounding our lives.”

During the debate, there was a pointed exchange between Idlout and the Bloc’s Sylvie Bérubé, whose sprawling northern Quebec riding includes Nunavik.

After Bérubé’s presentation, Idlout challenged her to describe in the House of Commons what the Inuit in Nunavik had told her about Bill C-29.

“I’d like to ask the member something that she did not really talk about in her presentation and give her the time to tell this House what the Inuit in her riding have said — the 14 communities — about Bill C-29.”

Bérubé replied in French that “Indeed, I do have Inuit communities in my riding” and referred to a trip to Aupaluk she made in October — the first time the MP for Abitibi—Baie-James—Nunavik—Eeyou had visited the Nunavik portion of her riding since she was elected in 2019 and re-elected in 2021.

“It’s very important for the Inuit that this bill be supported and passed,” Bérubé said through House of Commons interpreters.