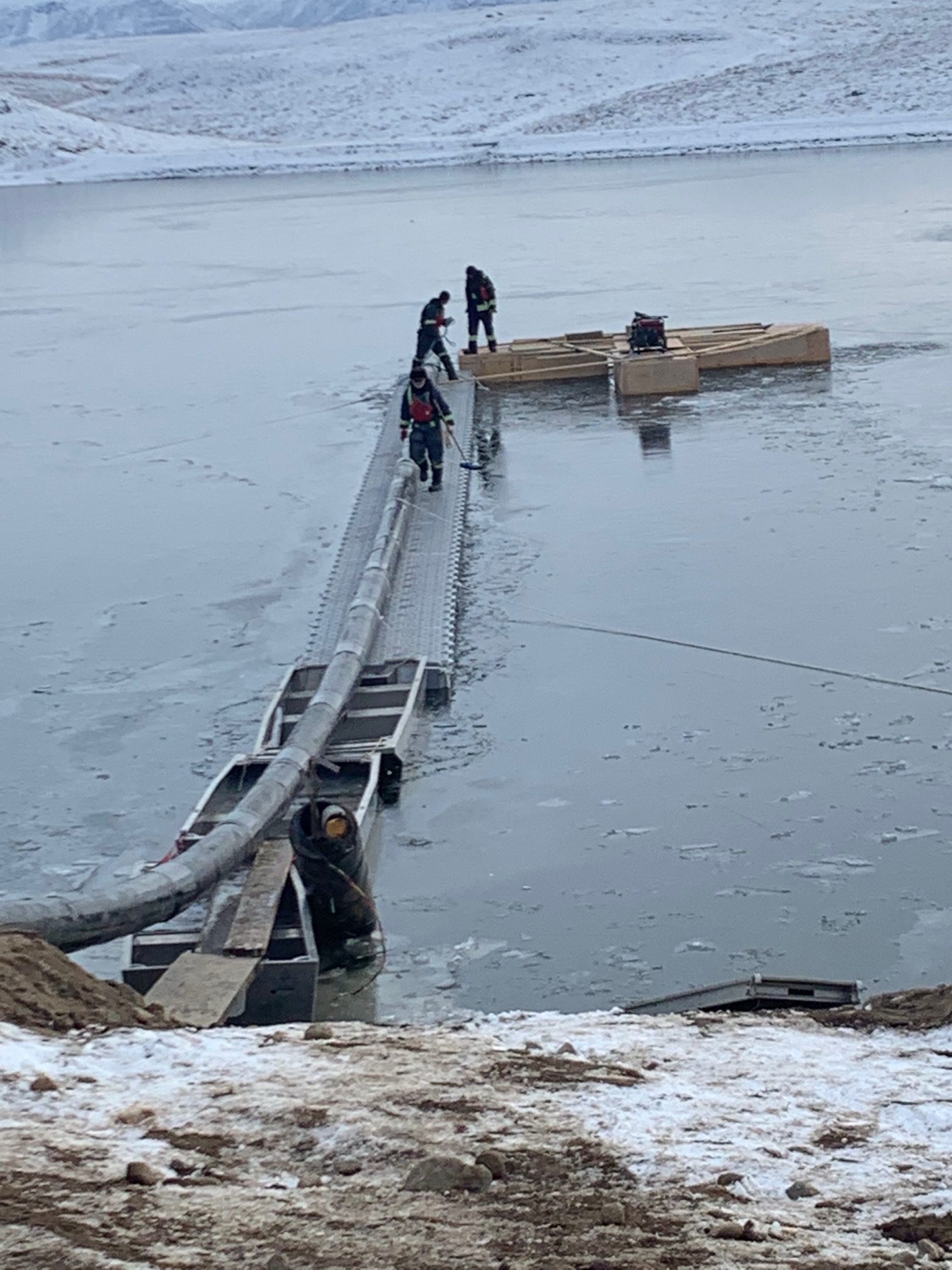 Pond Inlet’s new water intake pipe floats on the surface of the reservoir. It began operating at the beginning of October. (Photo courtesy of David Stockley)

After nearly a year of stopgap fixes, Pond Inlet’s water system is working

Intake pipe was replaced at the end of September

The hamlet of Pond Inlet has a new system to draw drinking water from its reservoir, after nearly a year of creative fixes to pump, treat and deliver water.

At the end of September, an engineer from the Department of Community and Government Services worked with contractors and a dive team to replace the water-intake pipe at the reservoir.

Now, an intake pipe floats on a dock on the surface of the water and draws water to the pumphouse, where the water is treated. Water can be pumped into trucks from there.

That meant that workers had to drive water trucks onto the frozen reservoir, drill a hole in the ice, and pump water into the trucks. Workers would then climb on top of the trucks and add chlorine to the water.

Then they would drive back to the garage, climb on the trucks again, and test the water to make sure it was good after “everything was shaken up and that sort of thing,” Stockley said.

In the summer, water was pumped directly from the reservoir to the trucks, and then treated in the trucks.

According to Kyle Seeley, the acting assistant deputy minister of local government for the Department of Community and Government Services, it’s unclear why the underwater intake pipe stopped working.

The dive team at hand during the repair tried to figure out what went wrong, using cameras to look down the pipe, Seeley said.

The malfunctioning pipe was underwater and buried. Sediment clouded the water when the divers moved the pipe.

“There’s a point where additional investigation is going to cause additional challenge, right?” Seeley said.

Stockley said that the government has promised the hamlet an entirely new water system by 2022.

“It’ll be a little higher tech than what’s there now as far as chlorination and everything,” he said.

From his understanding, there will also be a “couple more” communities that will get the same system.

“Unfortunately water systems have been put on the back burner and now it’s a rush job to get these stations in half-decent shape, back to where they should be,” he said.

Whale Cove’s water treatment system is particularly bad. It, along with seven other communities, is slated to have new water systems in place by 2023.