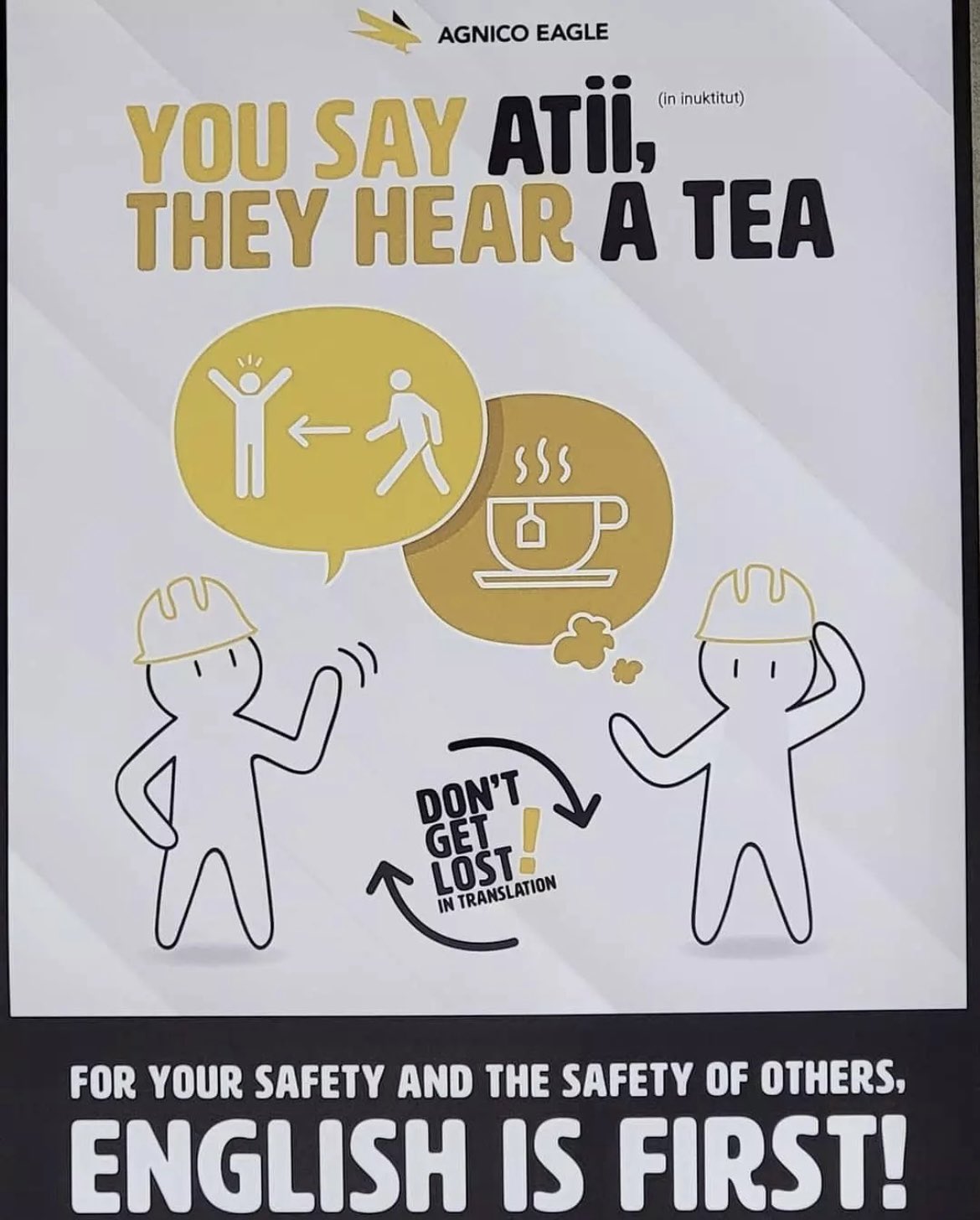 This poster was part of a recent safety campaign launched by Agnico Eagle Mines. The company has since apologized and withdrawn the signs. (Photo courtesy of Agnico Eagle)

Message should have been ‘safety is first,’ mining company says in apology

After coming under fire for a recent safety poster stating “English is first,” Agnico Eagle Mines Ltd., which operates several mines in Nunavut, has apologized and is withdrawing the signs.

The poster, which also read “you say atii — meaning ‘okay’ or ‘let’s go’ — they hear ‘a tea’,” and “don’t get lost in translation,” garnered attention from hundreds online after Becky Han, an Inuk musician and advocate for the preservation of Inuktitut, suggested the company teach their employees a few Inuktitut words instead, as guests on Inuit land.

Lonny Syvret, the senior advisor of the company’s Nunavut operation, said in an interview that “upon reflection, the message should have been ‘safety is first.’”

“While the purpose of the campaign was really well intended, we clearly failed in the implementation and the perception of the posters.”

The poster was part of a safety campaign and to promote English as the company’s language of operation, Sybret explained.

For safety reasons and with some miscommunications having happened in the past, he said all work-related communication needs to be done in a single language.

He said other posters with similar messaging about French were also printed, as the company hires employees from across the country.

Kusugak said he is unaware of any unilingual Inuktitut-speaking employees, but many have English as a second language.

“It’s well understood by employees the importance of using one language to communicate for the safety of all employees,” he said.

Off work hours, Kusugak said there are many interactions between employees of different cultures, for example, Inuit employees teaching others Inuktitut words and about Nunavut.

“[That] creates a better work environment for everyone, we love seeing that and we have encouraged that.”

Agnico Eagle issued an apology to Nunavummiut staff and the communities they operate in on Wednesday afternoon.

“Agnico Eagle recognizes that the land on which we operate in Nunavut is owned and traditionally used by Inuit and that we are visitors on their land,” the news release states.

Karliin Aariak, Nunavut’s languages commissioner, said Wednesday afternoon she had received a few complaints about the “English is first” poster and thought she might receive more.

Aariak’s office has launched an investigation, which will include determining whether the messaging goes against any laws.

“It’s a good sign when people are publicly speaking out about their language rights,” she said.

This is especially relevant in light of Thursday being truth and reconciliation day, Aariak said, adding “most, if not all” Inuit were prohibited from speaking their language in residential schools.

“We’ve kept our language alive for this long and we need to feel proud [it] didn’t die off,” she said.

“We should all [feel] the strength of our language and not be afraid to stand up for it,” Aariak said.