Youth seek focus on “the health and well-being of our people, lands, waters, and animals”

Representatives of Indigenous peoples from around the Arctic gathered in Rovaniemi, Finland, last week to call for greater efforts to slow the pace of climate change. (Photo courtesy of the Indigenous Peoples Secretariat)

Taking action to curb climate change and to preserve the circumpolar world’s Indigenous languages are among the key calls to action that emerged from last week’s Arctic Leaders Summit in Rovaniemi, Finland.

Representatives of Indigenous peoples’ organizations of the Arctic—the Aleut International Association, the Arctic Athabaskan Council, the Gwich’in Council International, the Inuit Circumpolar Council, the Russian Association of Indigenous Peoples of the North and the Saami Council—gathered in Rovaniemi from Nov. 13 to Nov. 15 to identify their priorities and discuss the future of the Arctic.

The top call from the Arctic leaders, as set out in their nine-page declaration, is for more action on climate change, which they said constitutes “a state of emergency” for their lands, waters, animals and people.

They want local, national and international forums and partnerships to work together to make progress towards the Paris Agreement targets for reducing greenhouse gas emissions.

ICC-Greenland’s president Hjalmar Dahl, who was among the signatories of the Rovaniemi declaration, said in a news release that the document is intended to reflect the historic concerns “we have all experienced as Indigenous peoples in the circumpolar nations.”

He said climate change is a “crisis” that is affecting the Arctic more than anywhere else in the world, “so that is why you see it first in the calls to action as the countries of the world prepare to gather in Spain next month for the COP25 Climate Change Conference.” 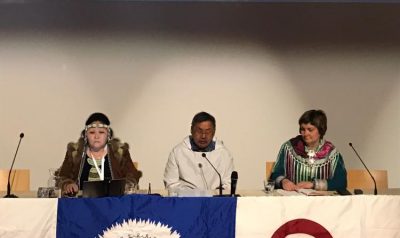 The Sixth Arctic Leaders’ Summit’s second day, Thursday, Nov. 14, was dedicated to the theme “Arctic Indigenous languages and environmental change,” with Aili Keskitalo, the president of the Saami Parliament in Norway; Dalee Sambo Dorough, chair of the ICC (on Skype); Johannes Lampe, the Nunatsiavut Government’s president; and Fenny Lekhanova, vice-chair of Russia’s teachers association for northern Indigenous peoples. They said Indigenous knowledge and Indigenous languages are inextricably linked, which again are linked to the environment and its dramatic change. (Photo courtesy of the Indigenous Peoples Secretariat)

Another key call touched on the need to support Arctic Indigenous languages.

“We are all facing language loss—all of us,” said ICC-Canada’s president Monica Ell-Kanayuk. “There are two calls for action here that address this issue, including the call for the United Nations to adopt a decade to focus on Indigenous Languages.”

In their declaration, Kanayuk-Ell and the other leaders called for measures to legally protect and revitalize their languages, and money to establish and support Indigenous peoples’ language schools.

The declaration also calls for more co-operation and an increased focus on language and culture, living conditions and sustainable development.

They encourage communities “to aspire to energy solutions that are aligned with the health and well-being of our people, lands, waters, and animals.”

They also refer to the “epidemic” of missing and murdered Indigenous women and girls, saying that in the Arctic, this is “directly related to the continued colonization and rape of our lands and waters by the fossil fuel, mining industries and green colonialism. The liberation of our lands and bodies are inseparable.”