Researchers who, prior to the pandemic, regularly conducted fieldwork in the Arctic say working with people on the ground is essential. In the Inuvialuit Settlement Region, local collaborators carried out much of the beluga monitoring this past summer when Department of Fisheries and Oceans researchers couldn’t come north. (Image courtesy of ArcticNet)

A “great COVID data gap” in Arctic science is likely to be felt around the circumpolar north due to this year’s pandemic.

That’s how Donald McLennan, the senior science adviser at the Canadian High Arctic Research Station in Cambridge Bay, said he views the pandemic’s impact on Arctic research and fieldwork.

COVID-19 “seriously impacted the amount of science we [were] going to do this year,” he said on Wednesday, Dec. 9, in a session on COVID-19 and research during this week’s ArcticNet conference.

In March, the Canadian High Arctic Research Station, or CHARS, closed to the public and sent its employees home, he said.

All fieldwork remained cancelled into the spring and through the summer.

“The bottom line through all this was the health and welfare of northerners during this difficult time,” McLennan said.

Not all data will be lost: some information collected by electronic devices out on the land will be salvaged as long as their batteries hold out, he said.

And those powered by solar or wind power will continue to collect information, he said.

But COVID-19 kept research in a holding pattern.

“We’re not alone. This is going to be a big hit to Arctic science this year,” he said.

The pandemic hasn’t completely halted research. Projects undertaken by northerners – such as a caribou health study with the Ekaluktutiak Hunters and Trappers Organization in Cambridge Bay – have been able to proceed.

“We’re certainly hoping for next year,” McLennan said. “Everybody is holding their breath … how confident will people in northern communities feel about outsiders coming north, even if there is quarantine and vaccination? In the end that will be the final decision.” 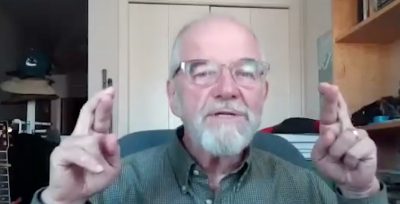 Donald McLennan, the senior science adviser at the Canadian High Arctic Research Station in Cambridge Bay, crosses his fingers that the pandemic eases during a session on COVID-19’s effects on Arctic research and fieldwork at this week’s ArcticNet conference. (Screen shot)

For Rosie Smith from the University of Waterloo, close collaborative relationships with her team in Kugluktuk made a big difference in 2020.

Smith is in the third year of a project on Arctic char.

She couldn’t make it to western Nunavut, but Erik Hitkolok, the project field co-ordinator, continued fishing, sampling and logging data.

Hitkolok said having watched how Smith and the other researchers worked made all the difference.

“It helped me with my project. So it was pretty straightforward,” he said.

But 2020 remained challenging for many others.

“It made for a really oddly quiet spring and summer. We learned how to do things differently … we adapted pretty well. ”

“We need both,” she said about the roles of traditional and scientific knowledge. “I want them to go hand-in-hand, equal partners.”

Collaboration appeared to be the key to many research projects during the pandemic, according to what other speakers shared during the ArcticNet session.

Mary Gamberg, a research scientist from Yukon, also conducts research in Nunavut. She said this past year showed her how important it is to have someone on the ground.

If she hadn’t found local help, her research on walrus, based in Iqaluit, wouldn’t have moved ahead.

“I hope we’ll have that even more. I hope that it becomes even more of a priority to develop community resources,” Gamberg said.