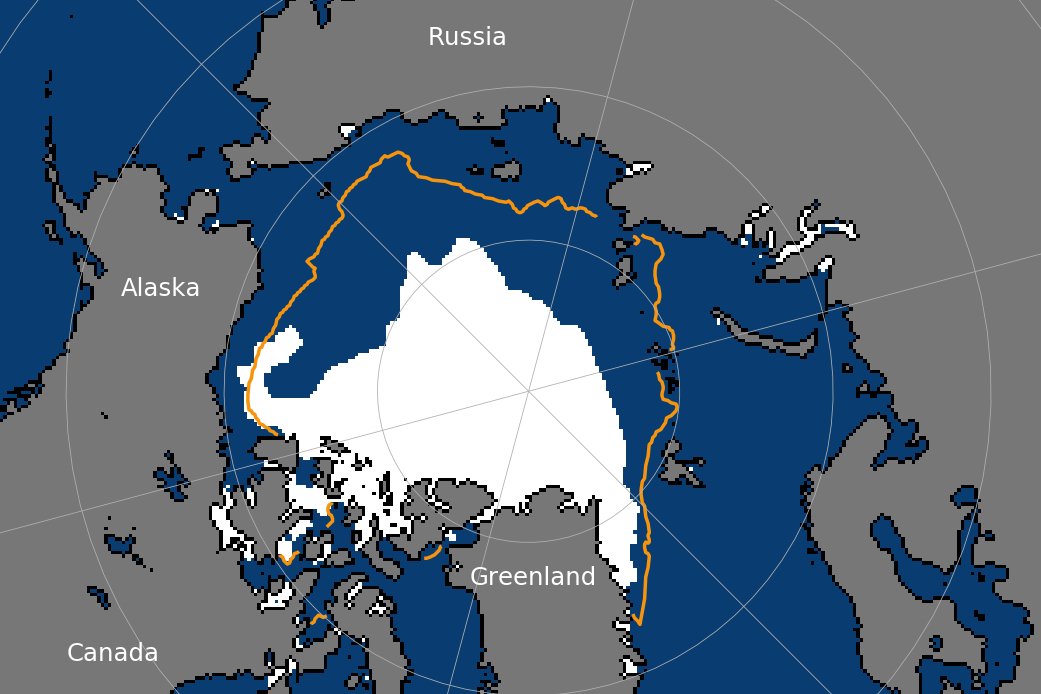 Arctic sea ice reached a minimum extent of 3.74 million square kilometers (1.44 million square miles) on September 15, likely the annual low — and the second lowest minimum on record. The orange line represents average extent of sea ice from 1981 to 2010 on that day. (Photo courtesy of the NSIDC)

Arctic sea ice extent fell to the second-lowest annual minimum on record last week, a status that followed a summer of extreme heat in Siberia and accelerated melt even after summer’s end, the U.S. National Snow and Ice Data Center announced on Monday.

Breaking that 4 million-square-kilometre threshold is likely to get attention, said Mark Serreze, director of the Colorado-based NSIDC.

“It’s only a number, but it’s only the second time it’s happened,” he said.

This year’s minimum was 2.51 million square kilometres (969,000 square miles) lower than the average annual minimums calculated from 1981 to 2010, the Colorado-based NSIDC said.

Extent is defined as the area of the ocean where there is at least 15 percent ice cover.

The 2020 ice retreat was part of a well-defined pattern. The 14 lowest minimums for sea ice extent have occurred in the last 14 years, according to NSIDC information.

“That is rather telling,” Serreze said. “The story is, we are in this new age.”

The “strong downward trend” in Arctic sea ice, despite some year-to-year variation, will ultimately result in an Arctic with no more summer ice, he said. That is expected to happen sometime in the next 10 to 20 years, he said.

Among the year-to-year variations is the changing location of extreme annual melt. Siberia turned out to be the hotspot this year, Serreze said; in other years different parts of the Arctic have the most extreme melt.

The Siberian heatwave, with temperatures hitting the first-recorded 100-degree Fahrenheit mark and massive Arctic wildfires burning, was part of a feedback cycle. Itself a product of Arctic climate change, according to scientists, it also contributed to Arctic climate change.

To some extent, this year’s extreme melt off Siberia was set up by winter conditions there, which made the ice there thin, Serreze said. “Once the melt started going, it had those self-perpetuating tendencies,” he said.

Those winter conditions were set up in part by a persistent positive Arctic Oscillation pattern that pushed ice from the Siberian coast, Serreze said.

The Siberian Arctic was not the only place where ice melt was extreme.

In the Chukchi Sea, where early summer ice extent was not unusually low by recent years’ standards, melt was dramatic in late summer. That resulted in the earliest ice-free state in the Chukchi in the satellite record.

Retreat in the Chukchi was pushed along by a late-July storm that chewed up whatever freeze remained at the time, said Rick Thoman of the Alaska Center for Climate Assessment and Policy. “I don’t think we would have been that precipitous decline without the end-of-July storm,” he said.

Having so much open water there will again make it more difficult for the winter freeze to set in, Thoman said, though sea-surface temperatures are not as warm as they had been in the past. “It’s going to be a late freeze up in the Chukchi,” he said. “If the weather was to cooperate, it might not be super-late.”

That large amount of open water is also expected to continue a pattern of increasingly warm autumns off Alaska, he said.

The declaration of a minimum is preliminary, the NSIDC said. A shift in wind patterns or some sort of late melt could reduce the total ice extent again, the centre said.