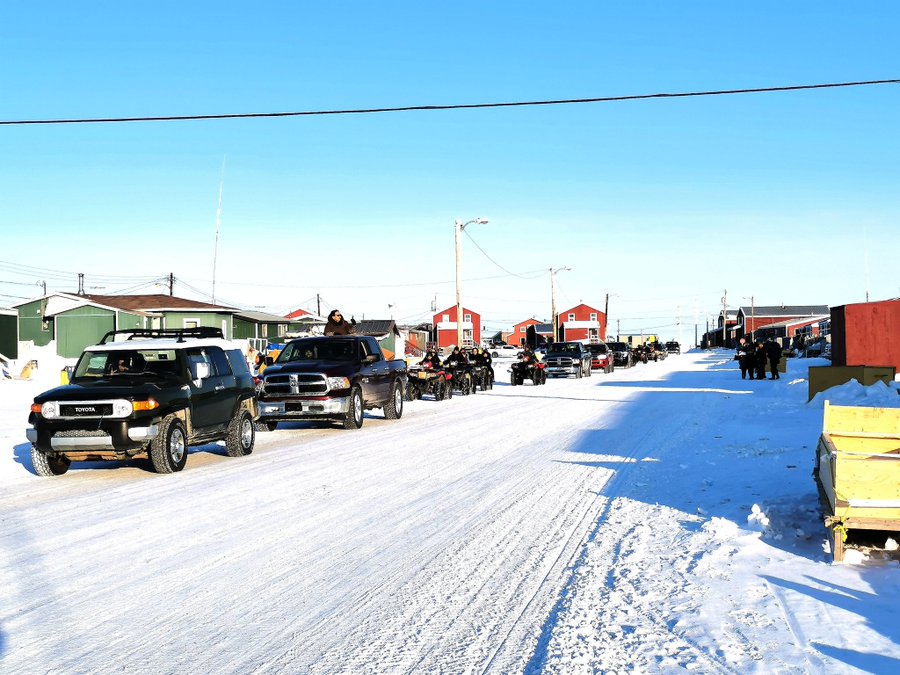 Vehicles of all kinds travel around the Nunavut community of Arviat on Tuesday evening as residents celebrate the end of their COVID-19 outbreak with a socially distanced parade. (Photo by Eric Anoee Jr.)

When Arviat’s Eric Anoee Jr. watched his community emerge from its COVID-19 outbreak, it felt “kinda like a war just ended and we won,” he says.

Arviat residents celebrated the end of their outbreak on Tuesday evening with a parade of vehicles around their community’s streets.

The festivities marked two weeks since the last person in the community of about 3,000 was out of isolation. The community had struggled for months to quell an outbreak that first began in November.

Anoee was among those who came out to view trucks, all-terrain vehicles, SUVs and other vehicles streaming by.

Mainly he took photos and watched “with joy, a lot of happy people during the parade,” he said.

Now he is feeling relieved because he won’t have to worry about people in town getting sick, he said.

And soon he’ll be able to play hockey on the sea ice, watch school plays, attend church services and visit his nephews, sister and brother, all of whom he missed during the outbreak. 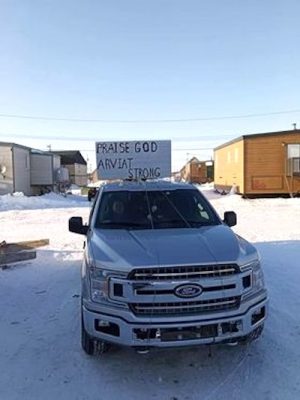 Paul Aliktiluk and his son Peter get ready to join the parade of vehicles through Arviat on Tuesday evening, for which they made a sign reading “Praise God” and “Arviat Strong.” (Photo courtesy of Paul Aliktiluk)

Paul Aliktiluk and his son Peter were among those in the parade, which started 7:15 p.m. after Mayor Joe Savikataaq Jr., announced on the community radio that Arviat was an “official COVID-free town.”

And the Aliktiluks decided to make a sign that read “Praise God” and “Arviat Strong,” which was often used as a hashtag on social media during the outbreak which saw 339 cases, including one death.

“Yesterday Arviat’s outbreak was officially over and I congratulate the community on reaching this point. If in the upcoming days there are no further cases, we will be in a position to ease the restrictions there on April 26,” Patterson said.

Patterson said this means that next Monday Arviat’s restrictions will align with those in the rest of the Kivalliq: businesses, schools and recreation facilities can open, and limits on gatherings will be widened, he said.

But Patterson reminded everyone to continue to maintain a distance of two metres from others in public if they aren’t members of their immediate household.

Arviat and other Nunavut communities that have seen COVID-19 outbreaks show that following the public health measures works, he said.

If Nunavut continues with the “model of partnership” between public health tracing and other measures, he said, “we will get through.”

On Wednesday, Nunavut had 33 active cases, 31 in Iqaluit and two in Kinngait.