“We’re in an experimental situation here” 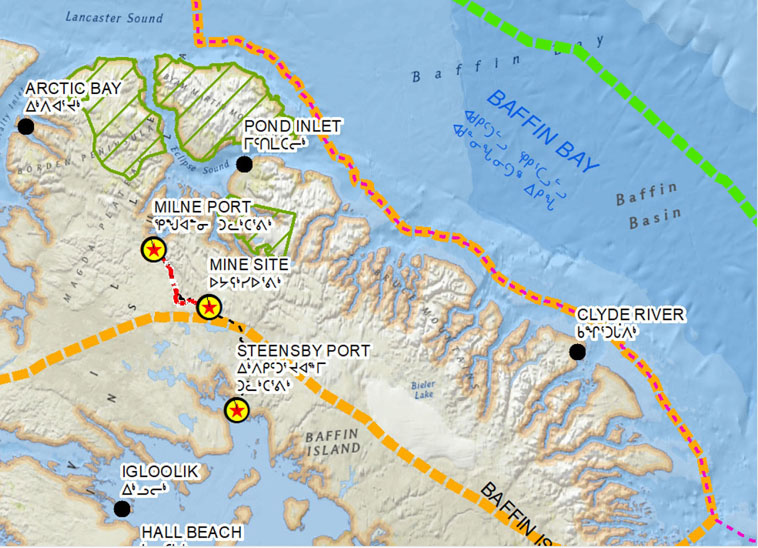 This map shows where Baffinland Iron Mines Corp. plans to build railways to support its mine on northern Baffin Island. (File photo)

Baffinland’s proposed railways will face a caribou problem, participants heard at a technical meeting on the company’s expansion plans last week in Iqaluit.

Lee said caribou also cross the company’s future southbound railway from Mary River to a port at Steensby Inlet, which Baffinland received approval for in 2012.

“The construction of a railway that bisects caribou habitat is unprecedented in Canada’s north,” said Susan Leech, a consultant with QIA and a senior ecology researcher with the Firelight Group.

“We’re in an experimental situation here.”

Baffinland said it has found that the impacts of both railways on caribou are “negligible,” which the company’s officials explained means they are too small to measure.

The company will hold a workshop at the mine site from July 29 to Aug. 2 to select areas where special crossings will be built to facilitate caribou crossings of the railway.

Leech said Baffinland’s current plans for the railways do not include “project protection zones” for caribou. She said she would like to see these zones established before the workshop next month.

“We should be at a point now where we can actually have some type of model.… The fact that we are continuing to rely on the significant number of assumptions, that is a weakness,” Leech said.

Baffinland also said it recently completed height of land surveys for the northern railway “focused entirely on looking for calving caribou” in the project area.

Stephen Atkinson, a wildlife biologist representing the Government of Nunavut, also expressed concerns about the structure of the proposed caribou crossings to be examined during the workshop.

Sections of the railway need to be made into longer sections to facilitate caribou crossings so the animals don’t have to travel far to find safe crossings, he said.

Baffinland representatives said they would be prepared to discuss the nature of these crossings during the crossing workshop and are looking to take direction and provide information.

Both railways would be the first ever built in the Canadian Arctic, and would increase production from Mary River to 30 million tonnes of iron ore per year.

Enookie Enuarak of Pond Inlet’s hunters and trappers organization said he wants to know what the company’s plans are to compensate Inuit for the cost of caribou that may be lost because of the project.

Baffinland’s Megan Lord-Hoyle said Enuarak’s question was an example of why the open discussions that took place during the technical meeting were so important. She said she does not have an answer regarding what Baffinland can offer, but hopes to continue the discussion at the next meeting to bring an answer forward.

“Loss is not what we want. We are working hard to ensure that any potential impacts as a result of development of this mine and the expansion are minimized. We want to ensure that monitoring of project effects include Inuit,” she said.